Archive for the ‘YG Family’ Category

Photo: Backstage Photo of Dara and Daesung in Saitama for Daesung’s Concert

Weeee!!! We were right after all! In her previous twitter update, Dara said she was going to Saitama, for her last night in Japan and that the place was sweet to her ears! So Japanese Blackjacks mentioned that she then might be going to Daesung’s concert!

Prior to having this photo, many J-fans related how Dara seemed to have enjoyed the concert, and even went in the venue with a fruit basket (that you can see on the picture below) as a support present for Daesung ^^ 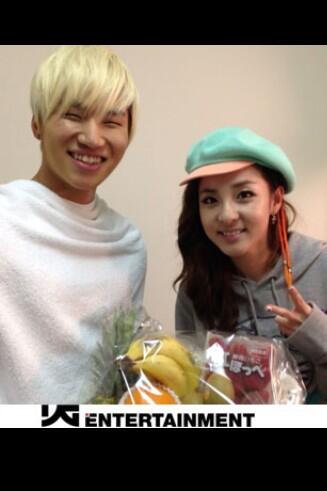 Hmmm, I wonder what this would mean to 2NE1 and to the whole YG Family. Either way, I’m excited for what they have in store for us. ^^ 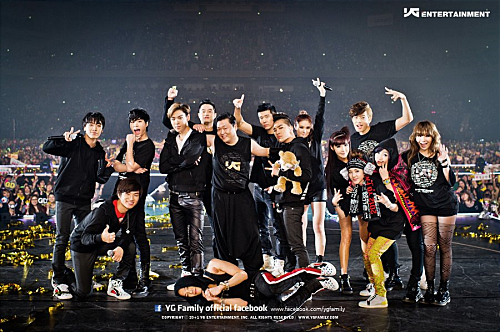 The contract will bring together YG Entertainment′s K-Pop content and Aurora World′s merchandise production and licensing expertise. The two companies aim to add YG′s content to a variety of new merchandise areas, then market and sell the goods to the world.

Aurora World is a character marketing company which has recently been promoting its self-produced animation Yoohoo and Friends with Happy Meals in 6,000 McDonalds branches, scattered throughout 40 European countries.

YG Entertainment and Aurora World′s new partnership is expected to bring about a new wind in contents marketing, and expand the global K-Pop boom to a successful merchandising business.

YG Entertainment artists such as Big Bang, Epik High and 2NE1 are gearing up to expand the K-Pop industry in Germany.

It was revealed that Epik High was chosen as the best Hip-Hop artist. Best boy group went to Big Bang and best girl group to 2NE1. For the male solo category, G-Dragon was chosen.

For all the categories, from hip-hop artist, female-male solo, group, etc, YG Entertainment artists were chosen for all sections. For the best female solo, CL was chosen along with Lee Hi at number 8 and 9. Singer Ailee was chosen as number 1.

In Korea, YG was also chosen as the country’s best entertainment company with SM Entertainment at a close number 2.

In 2012, YG artists took over the muss charts for one year and was successful with all their new releases. They also successfully completed their world tours and overseas activities as well.

Epik High, who released a new album after a 3 year hiatus along with Psy, 2NE1, Big Bang, Se7en and others, all released new albums that all ranked number 1.

In the case of Big Bang and G-Dragon, their solo and drop title songs were all seen taking over the charts.

YG stated that after the comeback of Psy on April 13, other artists such as Big Bang, 2NE1 and others will be making their comebacks as well.

Big Bang member Daesung also just recently held his first solo Japan concert and will continue to other cities in Japan as well for a total of 19 cities and 25 concerts.

G-Dragon has also begun the Japan portion of his solo world tour and will meet with a total of 550,000 fans from Korea and Japan.

Wooot! Spotted! 2NE1 watching Big Bang’s final concert for their Alive Tour. 2NE1, as well as the other YG Family artists were spotted at today’s concert, in support of Big Bang. Weee! Congratulations to Big Bang for a successful world tour! <333

Weeee! Our girls won a Digital Bonsang Award at this year’s GDA! 2NE1 didn’t attend the ceremony, so Lee Hayi accepted the award in behalf of them. YG Family! ❤

Golden Disk Award is like the Korean version of Grammy Awards. Congratulations 2NE1! ^_^ 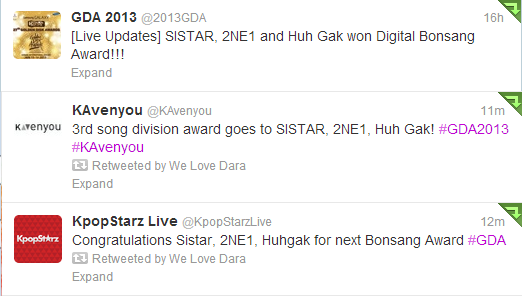 Check out cute Lee Hayi accepting the award after the cut! ^^

END_OF_DOCUMENT_TOKEN_TO_BE_REPLACED

Who wouldn’t adore Lee Hayi? She’s just too cute and very talented too! ^^ I remember watching her train in front of YG, CL, Bom, Dae, and YB during KPOPSTAR. And now, she’s a part of the YG Family. Woooot! Go Hayi! <333 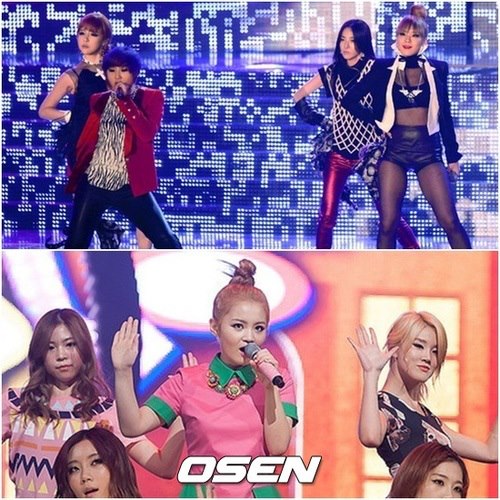 Recently, the popular girl group 2NE1 is busy treasuring Lee Hayi. They’re not only helping her out with their know-hows about singing and dancing lessons, but they’re also teaching her their hard-earned first hand experiences in staying fit and dieting as her seniors. Why? Because Lee Hayi is the one who replaced 2NE1’s 5-year-long position in their agency as the youngest artists.

According to an insider, 2NE1 and Lee Hayi became as close as sisters during the process of switching their hit songs and performing them at the end-of-the-year MBC ‘Gayo Daejaejun’. Through last year’s ‘Gayo Daejaejun’, 2NE1 performed Lee Hayi’s debut song ‘1,2,3,4’ and Lee Hayi performed 2NE1’s mega hit ‘I Love You’ and then sang all together, showcasing the quintessence of collaboration stages.

YG Entertainment stated that 2NE1 grew to adore Lee Hayi during their Gayo Daejaejun practice, as they began to see Lee Hayi’s genuine and humble attitude, as well as her determination in maintaining her direction in music.

2NE1 hasn’t had much interaction with other celebrities because they seldom appeared in TV variety shows or other activities outside their group so far. The insider says, “It’s no surprise that 2NE1 loves the only junior artist and adorable girl that Lee Hayi is, considering the fact that even under the YG Family BIGBANG has been a senior and male group and Gummy is an even higher-up senior to 2NE1, which made it difficult for them to approach them easily.”

Meanwhile, Lee Hayi the rookie who swept the music industry with her debut during the last half of 2012 has a new album release ahead, and 2NE1 is also about to have a comeback during the first half of this year.