Pretty Sandara Park is pretty! ❤ Congratulations Teddy for scoring this collab! The headphones are super cool! ^^ 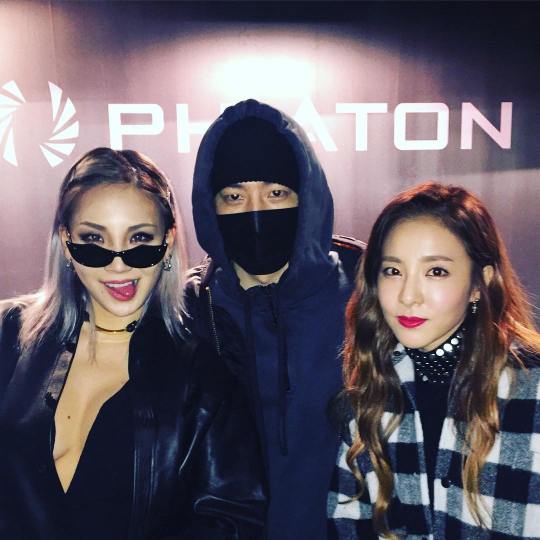 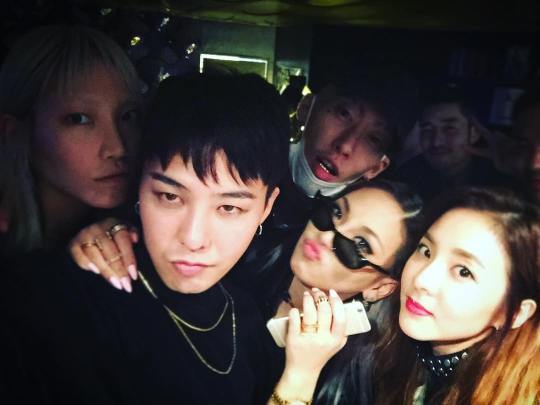 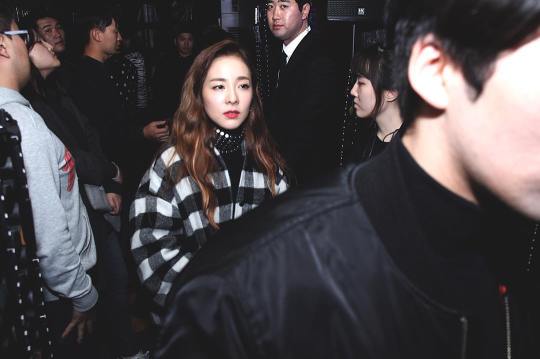 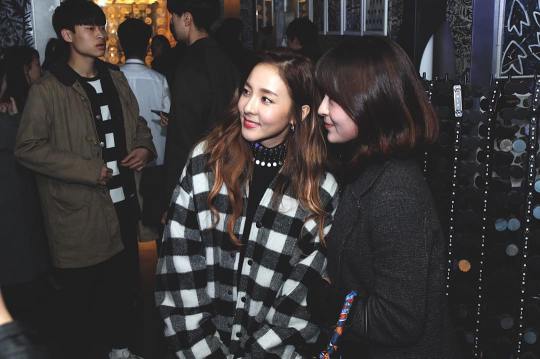 Check out the cut for more fantaken pics! ❤

END_OF_DOCUMENT_TOKEN_TO_BE_REPLACED

Interview: Teddy, 2NE1’s Crush “Put So Much Thought Into It”

[EXCLUSIVE] TEDDY, 2NE1’S CRUSH “PUT SO MUCH THOUGHT INTO IT” (INTERVIEW)

On the phone interview with Star News on Feb 26, TEDDY sounded confident about 2NE1’s upcoming full album that is to be released at 12 am, which is 0 hour of Feb 27.

He said, “2NE1 has been loved with many songs, but being unable to stray away from those hit songs can hinder them from going further,” and, “So despite the risks, we decided to create a song that will last.”

He added, “There are so many ‘instant’ songs these days, and I and 2NE1’s members and other producers decided to focus on a song that will last.”

When asked the concept of music, he said, “It’s colorful.” “2NE1 was able to showcase electronic, hip-hop, R&B, reggae and more, and the latest one is also a mixture of many. But it doesn’t look messy. It naturally blends all the different kinds of music 2NE1 can take in.”

As this is the first one in many years, the preparation took that much time. He commented, “Out of 10 songs, some were produced in 2 to 3 weeks, while other ones took 2 and a half years.”

The title song “COME BACK HOME” is identical to that of Seotaeji and Boys, a group of which YG’s founder YANG HYUN SUK was a member. “It has a hint of reggae with melody. It’s sentimental.” When asked why it’s named the way it is, he said, “I liked the word HOME more than COME BACK. I realized how good this phrase is.”

TEDDY extolled the producing skills of CL, who will showcase 3 of her own written and composed songs. “There are only 3 in this album, but there are about 20 songs she wrote and composed. She works very quickly and produces good music. She does this despite her young age. She’s very talented. She often shows me her songs, and I can say for sure that she is good at producing and she possesses her very own musical mind.”

When asked how 2NE1 would do with the latest album, his answer was modest. “I often fail to predict correctly. The listeners will judge the album.”

But he looked greatly satisfied that the album encompasses 2NE1’s real talents and their colors. He explained, “You can have your expectations high for each song in the album. We put so much thought into them, so I hope people trust us when they listen to the songs.”

News: 2NE1 Congratulates Teddy And Wishes They Were in Relationships Too

2NE1 Congratulates Teddy And Wishes They Were in Relationships Too

On November 25, the news of Teddy and Han Ye Seul dating broke and drew much public interest. According to reports, the couple began dating six months ago.

On the same day, 2NE1 was being interviewed at a local pub and asked if they knew beforehand that their producer Teddy was dating someone. “We had no idea,” they confessed.

“We see Teddy when he’s at work in the studio, but since we like to joke around a lot – he’s more like an older brother to us. Once we heard the news, we were really surprised. There was nothing different about the way he acted around us. Even while we were working on our music video, he looked over all the details, including our clothes, and didn’t seem the slightest bit different. So hearing that he was dating someone was sort of a surprise,” saidCL. The members then clapped and congratulated Teddy on his new relationship.

When asked about their own personal lives, CL replied, “I don’t have a love life. I really do want to date.” She then asked the other members, “If you had a boyfriend, would you want to tell everyone?”

Park Bom responded by saying, “I think it’s because of CEO Yang Hyun Suk that there haven’t been any guys. They might be intimidated because of our stardom, since they hardly ever try to approach us.”

Sandara Park chimed in, “It’s been a long time since Yang Hyun Suk lifted the dating ban, but I still haven’t found a boyfriend yet – so it’s even more depressing.”

CL added, “Minzy and I are still under the dating ban, but saw that nothing happened when the unnies were finally free to date. I thought, ‘Ah…I guess even if you’re free to date, nothing really happens either,’” causing everyone to laugh.

COOL! We get to see how Twosome was conceptualized  even a part of the construction. ^.^ We also see a glimpse of the store’s opening! As we all know, Taeyang, G-Dragon, and the Park sisters all went to show their support during the opening day! ^_^

If you guys can remember, this was taken during the grand opening of Teddy’s “TwoSome Studio Cafe”.

This photo was taken when Dara and Bom, together with the rest of YG Family, attended the opening of Teddy’s “TwoSome Studio Cafe”. ^_^

And this one was when Dara, Bom and Minzy attended the VIP Premiere of the movie “Berlin”! 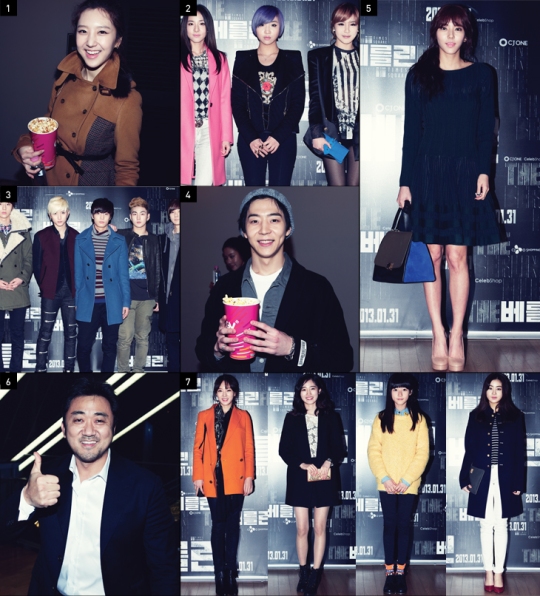 Fancam: 130214 Dara and Bom at the Grand Opening of Teddy’s “TwoSome Cafe” 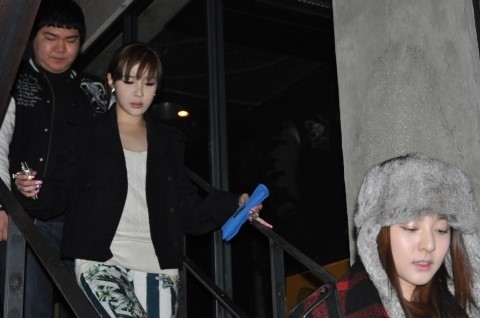 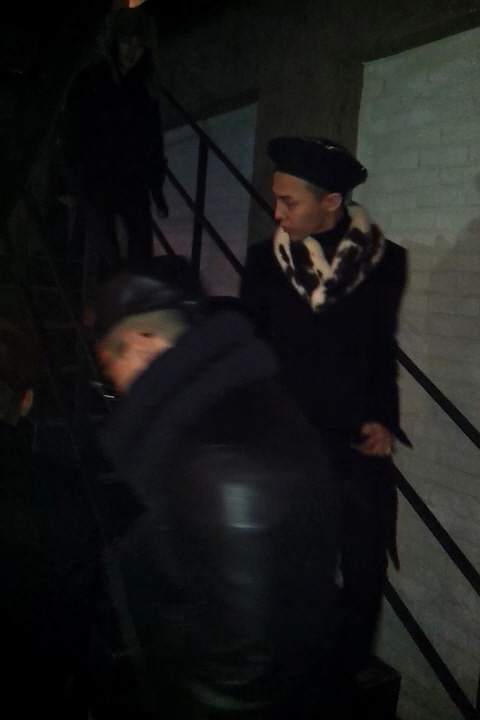