Instagram: Birthday Girl Dara thanked all her friends who cant attend her party and send her video greetings

I was so suprised with video greetings from my friends from all over the world who couldn’t make it to my party in Manila!!!

Thank you to all my friends who sent in their video greetings from all over the world!!! It would have been fun if you guys were able to attend my party in Manila. Thank you sooooo much Soojoo, Youngwoo, GD, Soonho, Jaewoo, Jeremy, Verbal!!!

Instagram: Birthday Girl Dara shares pictures some of the cakes she recieved 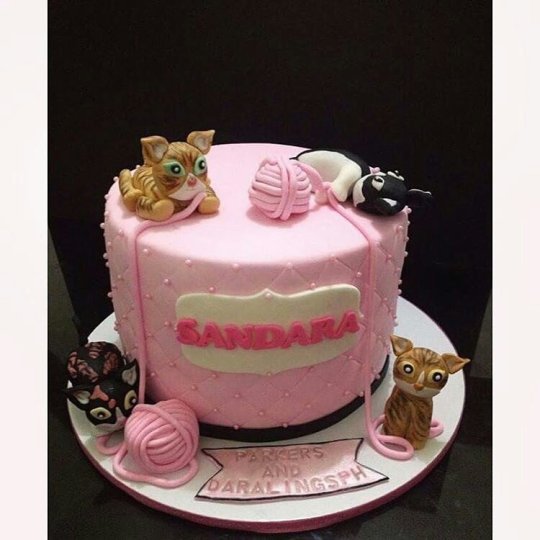 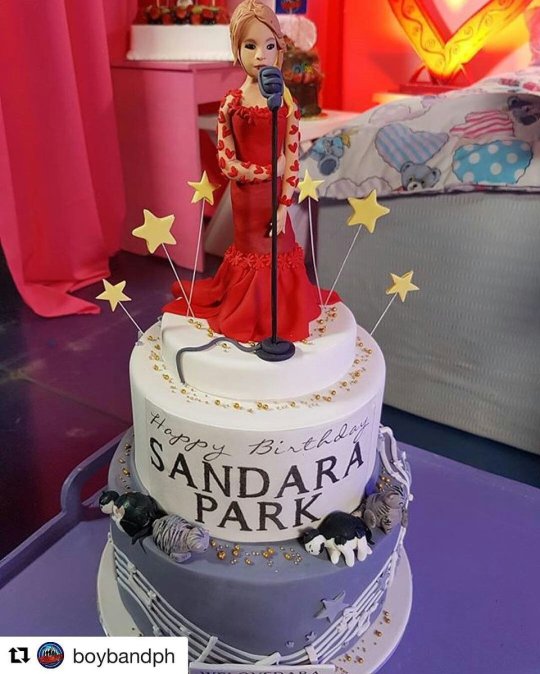 Thank you sooooooo much #TeamPBS

because of you I was able to have my celebration in Manila!!! 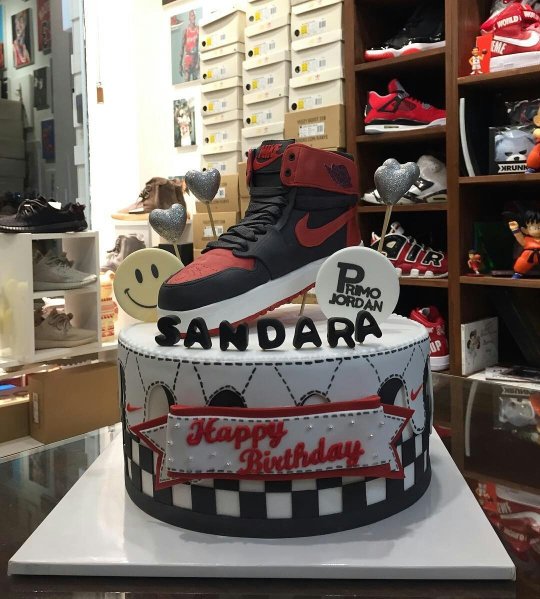 primo_jordan thank you very much always!!! The cake is super cute!!!

How to eat this~ 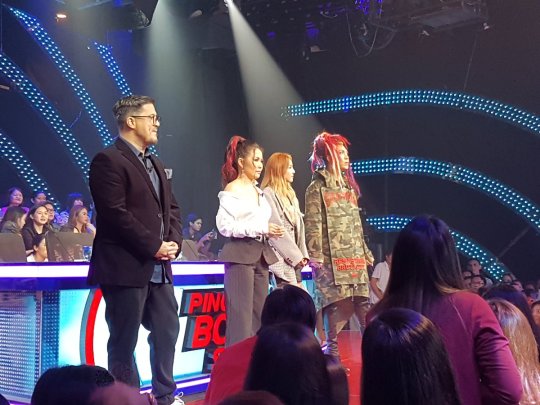 The judges are ready! #BoybandPH2ndLive 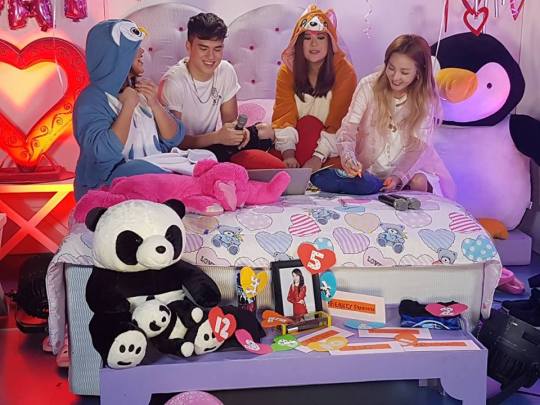 12 Dara Treats to be given! Happy Birthday Judge @krungy21 #BoybandPH2ndLive

#goddessDARAday They love you so much because you are one of those people who really deserves to be loved, respected, and cherished.. ❤

So so so cute! ❤ Thank you YGFamily.com for showing us these! They said they wanted to share Dara’s “every day life” to all the Blackjacks who are waiting patiently and who are supporting her all the way.. ❤ They said that it’s the birthday of “fresh vocals and rookie actress” Sandara Park! ❤ 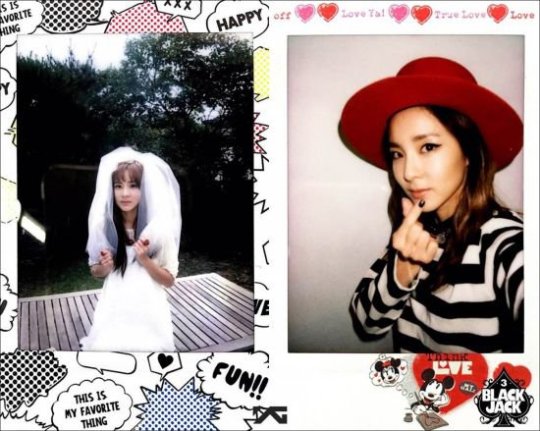 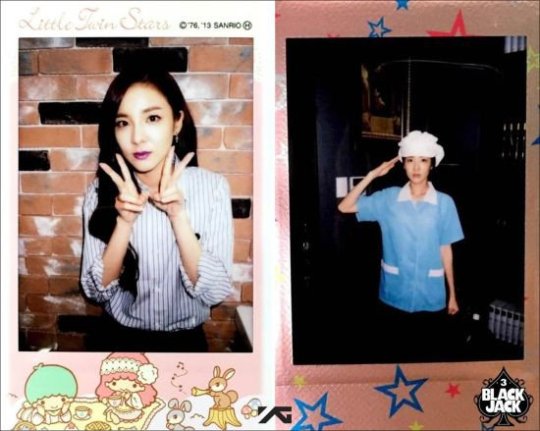 Instagram: Harin Shares an Adorable Photo with her “Sweetest” Dara-Unnie ~ “Love You Unnie!”

Awwww! Harin is so cute and sweet! ❤ Dara and CL are really close, so I’m glad that she and Harin got to know each other too.. ❤ So cute! ^^

OhMyGoddess prepared gifts, a very cute cake, and snacks for Dara during her shoot for Sugar Man! ❤ They also gave staff some gifts as well.. ❤ Not only that, they also did a briquette service in Dara’s name! ❤ They uploaded their certificate that they got after doing it.. 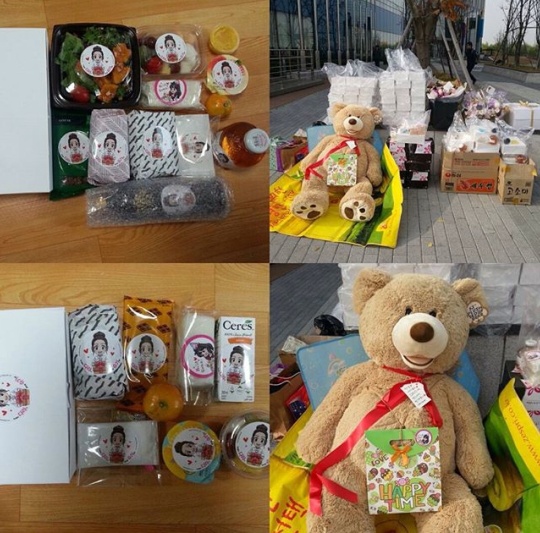 2015.11.11 youngest MC DARA getting ready for Sugar Man~~~Enjoy your meal😙 Prepared support for MC Darong and for Dara’s birthday celebration at Sugar Man with OMGDARA😉 Enjoy your birthday meal too, please support and greet our Dara 🙇🙆 #SugarMan_forDara_requestDara#Fighting_YoungestMC #Dara #Sandara#SandaraPark #SugarMan 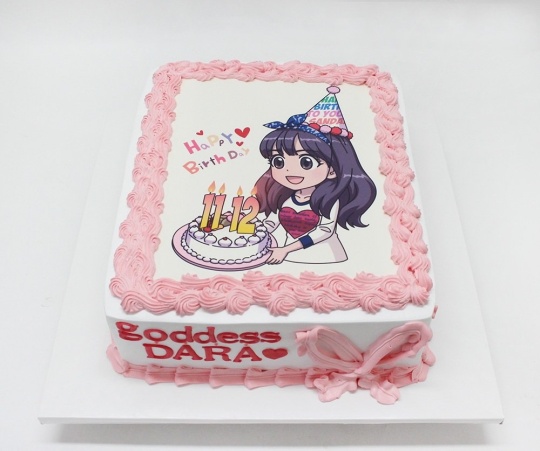 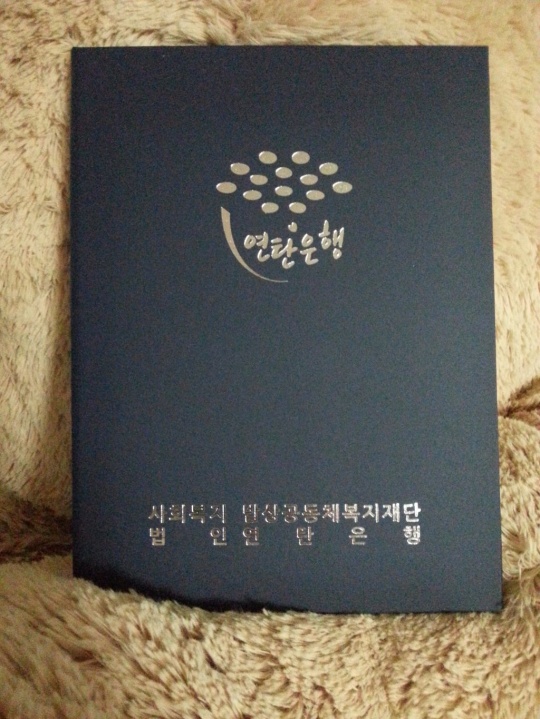 And of course, PR Director DAra gave them her business card and a polaroid with her gifts.. ❤ 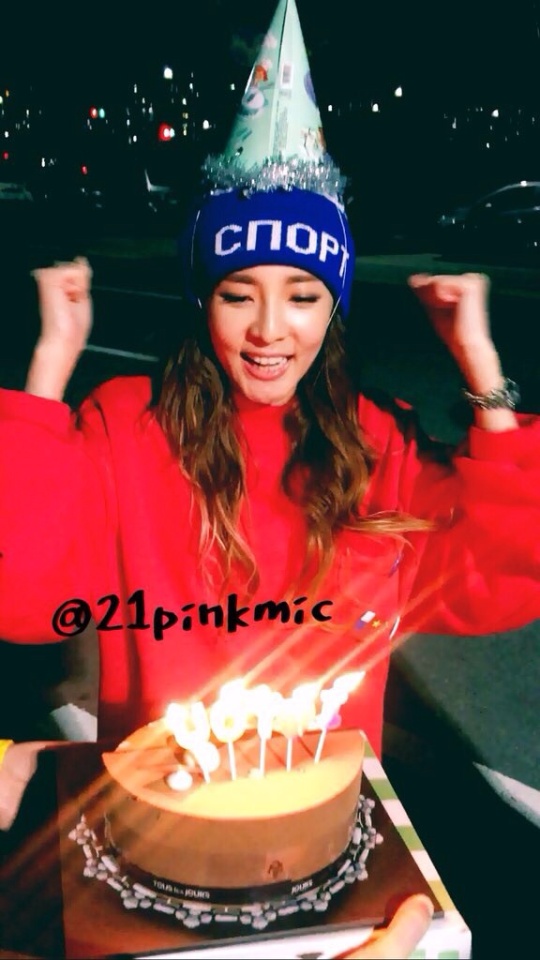 END_OF_DOCUMENT_TOKEN_TO_BE_REPLACED

Congratulations to #BLACKJACK around the world this was made public for #BLACKJACKNOLZA #goddessDARAday ! For more Dara’s daily photo go over to BLACKJACKZONE!

The representative brand of YG Entertainment‘s actors and the YG channel where one can go to meet their activities, news, and planned contents, YG STAGE (www.ygstage.com) has released the grand third pictorial project ‘MAISON DE JASMINE’.

The person in charge of ‘MAISON DE JASMINE’ PART.1 is Sandara Park, who is working actively as an actress in recent web dramas ‘We Broke Up’ and ‘Missing Korea.’ Dara showed pure and beautiful features as an actress, like the flower petals of white jasmines, which is different from her charismatic features as a member of 2NE1. Sandara Park revealed her feminine charm as never seen before for this STAGE pictorial.

The third STAGE pictorial, ‘MAISON DE JASMINE’ was conceptualized with a motif of pure white flower jasmine. Like its title ‘MAISON DE JASMINE’, which means ‘House of Jasmine’ in French, it planned to capture Sandara Park’s unaffected, natural features at ‘home’.

The photoshoot started at the garden. Sandara Park showed her beautiful, natural features with barely-there-make-up that is so light that she looks almost bare-faced. She shone brightly in the sunlight, like white petals beautifully opening up.

Sandara Park revealed various charms like pure beauty during some moments, while showing a more mature beauty at others. It was time to see Dara’s sedate eyes as an actress, which she didn’t show as a singer. While it was a bit chilly during this early winter weather, she was only wearing a thin dress in front of the camera. However, she concentrated on acting despite of the cold weather like a professional.

The next shoot took place in the bedtroom, where it had a more natural, relaxed, and comfortable atmosphere. In a white knit cardigan, along with same-colored lace dress, Sandara Park showed clean and pure features on screen. In the sunny bedroom filled with warm afternoon sunlight comes in, Dara expressed relaxed warm feeling well. 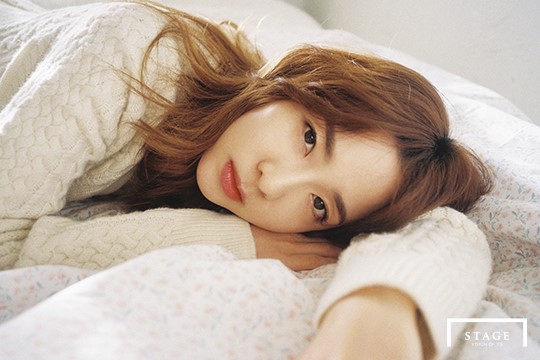 Bed, pillow, blanket, and knee-socks. Dara’s bedroom in all white tones completely matched her well to represent the pure white beauty of jasmine flowers really suits her well. Dara was like a white jasmine flower itself. Dara expressed the concept of the pictorial well with a more comfortable look as the second part of the shoot carried on in the bedroom. 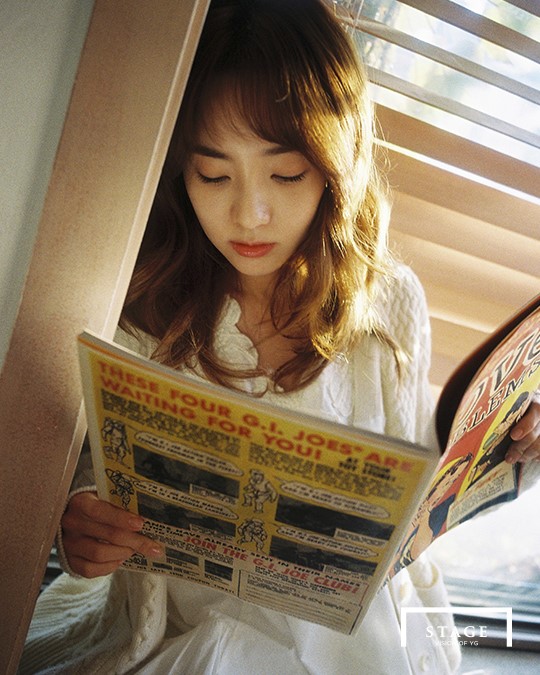 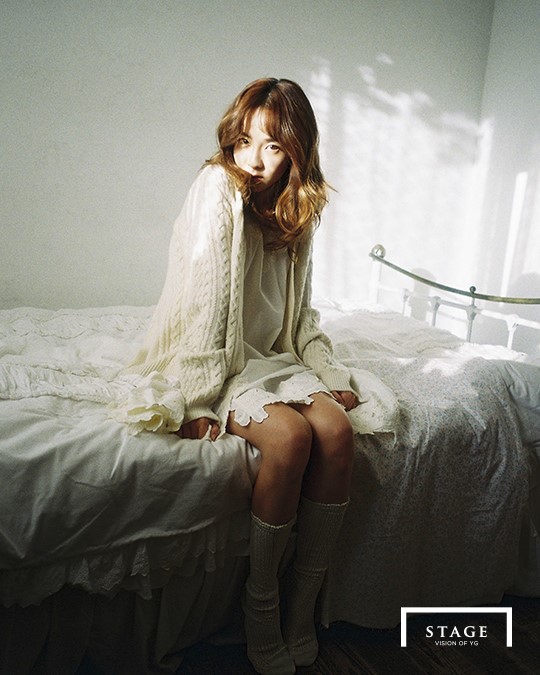 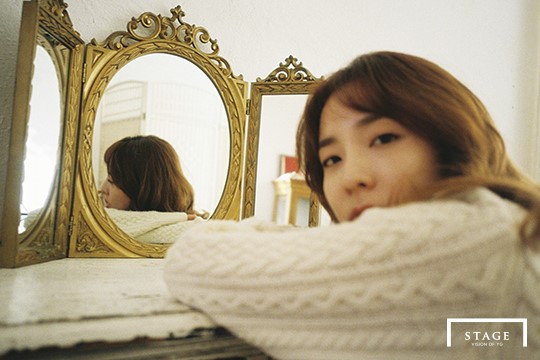 This is the photo that we could see on the ‘MAISON DE JASMINE’ teaser video, right? We could see Dara’s back as she bathed in the warm sunlight while leaning on the window sill in the teaser video released on November 10. That photo was taken during the shooting of this scene. She expressed a rough image while applying lipstick on her lips on the shooting followed and it was a photo with a new image. 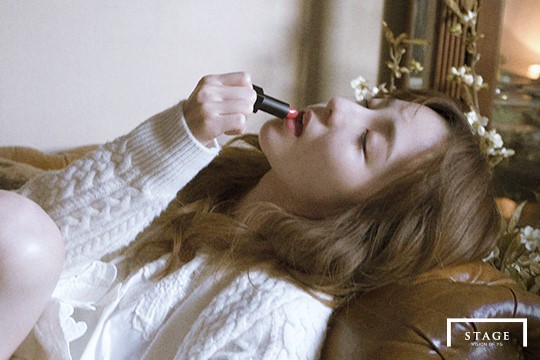 We cannot miss out the behind cut for NAVER Entertainment Special reader, right?

It must be this kind of feeling if you see Dara in real. She’s like an actress in reality! Petite Dara was shining among the many staff and crew, and showed a presence of an actress that filled up the shooting site. Dara with her refreshing attractiveness that captured all of the staffs’ heart at once.

The STAGE pictorial ‘MAISON DE JASMINE’ was a collaboration work with photographer JDZ Chung who has worked a lot with YG artists in the past, such as WINNER. Dara and the photographer were able to carry a unique, and sensitive dynamic while taking the photos for the pictorial. 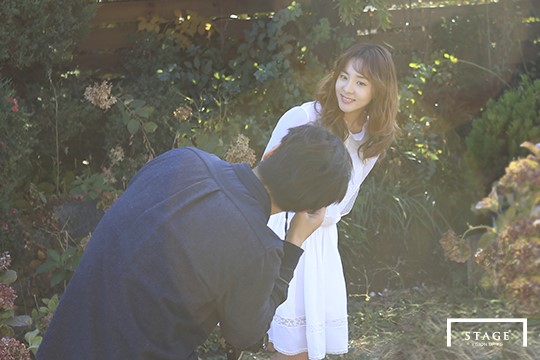 In addition, the best combination of staff including stylist Seo Soo-gyeong, Soonsoo Beauty’s hairstylist Kwak Dong-woo, and make-up artist Shin Kyeong-mi participated. They compounded upon Dara’s refreshing look and styled her so as to maximize Dara’s original attractiveness more than ever. 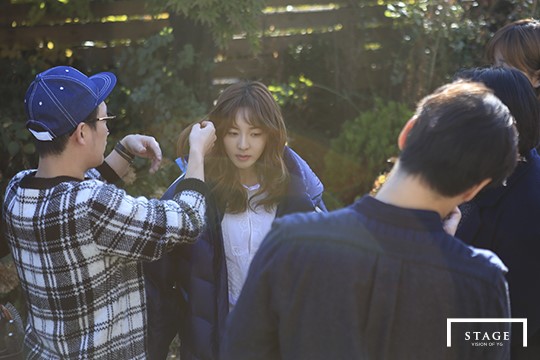 Sandara Park tried her best while doing the photoshoot. She did not stop smiling even though she was already sniffling because of the nippy weather. She’s easily affected by the cold, so she had to wrap herself with a padded coat, blanket, and hand warmers. It was because of her hard work and efforts that made this a good pictorial.

“I like to challenge a new thing every time so I love to shoot this pictorial with something new image I was happy to see the results photos of me with the features that I didn’t know for myself. I had feminine images!!! I will challenge constantly in the future! ^^” – by SANDARA 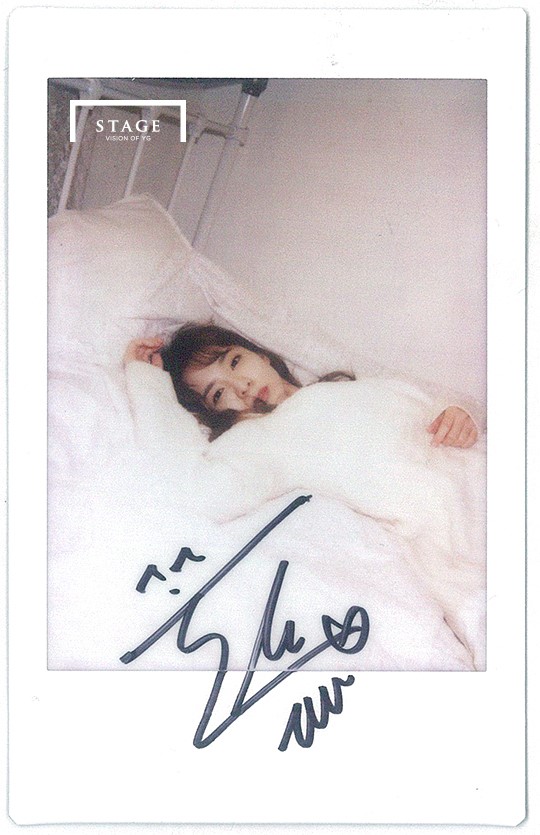 Happy, happy birthday Dara! ❤ I don’t think there are words enough to express how proud we are of you and how happy we are seeing you pursuing your dreams with such passion and enthusiasm. Your work ethic inspires us to truly give our 100% to everything we do. Your love for your family inspires us to treasure ours as well. Your high regard and true love for your friends and colleagues inspire us to be the best that we can be not only to our peers, but also to our subordinates as well. ❤

We love you, not only because you have a gorgeous outer appearance, but we love you even more because of the heart that shines truer and more radiantly that your outward appearance. Here’s to more years with you! We will always support you, no matter what! ❤

“The more you praise and celebrate your life, the more there is in life to celebrate.” – Oprah Winfrey 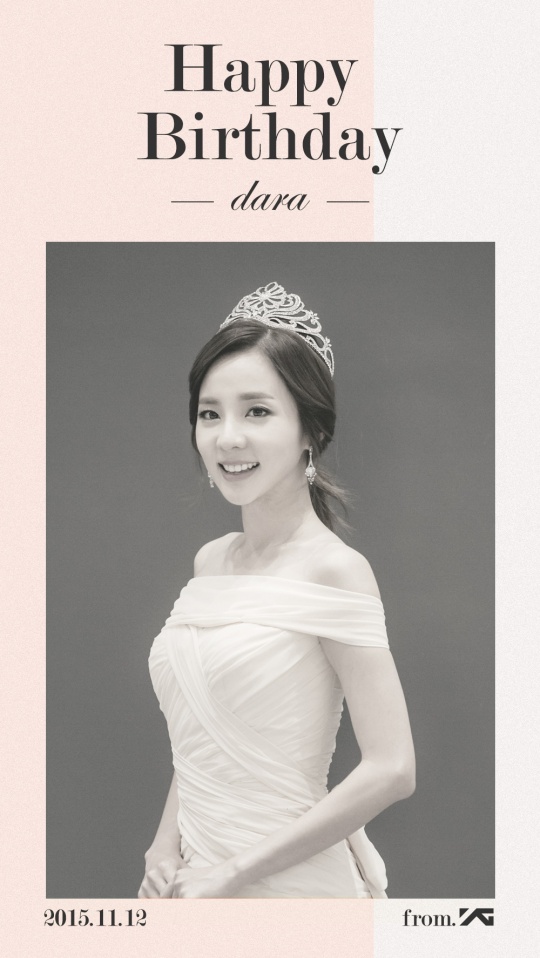