Yes, our goddess is the prettiest celebrity without make-up! And whoaaa! 40% of the votes is really, really something else!

Vacance here makes vacation! ^^ Don’t we all want to go on a vacation with Dara? She’s always #1 in our hearts!

Idols build up their images from their first stage appearance, before they begin to establish their own images. Depending on their group’s concept, plus other variables such as their costumes, the time of their debut, and the number of their activities, their images will also change. Make-up plays a big variable in girl group styles. 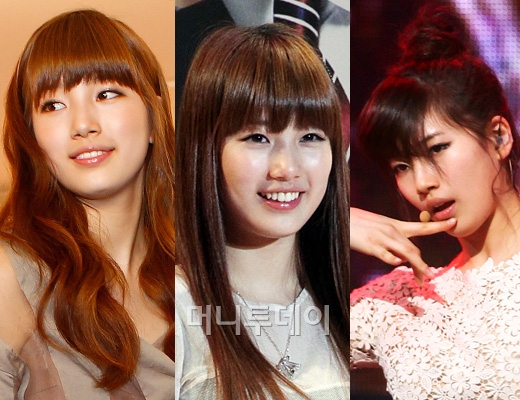 With Miss A‘s sexy dancing and singing, Suzy made her debut with the group’s sexy image, meeting the public for the first time with semi-smokey make-up. But with her appearance in the KBS Drama “Dream High” last year, where she played a student, Suzy became popular with her clean eye make-up, with little color or no make-up at all. Her cute image in the drama became more associated with her, compared to her stage image.

Group 2NE1’s Sandara Park is a great idol representative. With her small face and cute facial features, she made a strong impression during their debut for the song, “Fire” with her strong eye line on their stage performances.

Sandara Park then became a cosmetics model (Etude House), and since then has attracted people with her bright and youthful look, while sporting light make-up mostly in orange and pink shades, giving her a more feminine look. This makes people forget that she’s actually an ’84 liner, because of her young looks.

News: Cuteness Factor: the key to a girl group’s success?

Korea is currently in its girl idol group phase, but what is the reason for the boom in popularity?

The reasons behind the immense popularity of girl idol groups range from their simple concepts to their catchy songs, from their individual talents to their eye-catching performances. However, there seems to be one more interesting reason behind many female idols’ fame.

Osen recently pointed out that cute members of female groups tend to generate widespread interest and bump up a group’s popularity singlehandedly. Every member has their own individual role in the group, and every group has a member in charge of being the ‘cute’ one. In Korea, fans call this certain member “Kui-yo-mi (귀요미),” meaning “the girl with the cute image (귀여운 이미지를 가진 이).”  This member is in charge of garnering fanboy love with her cute/lovable/girly charm, which will result in a bigger fanbase for the group. In this report, Osen identified four girl group members that fit this role.