Haha, the cute idol balls! ^^ You can see a glimpse of the cute 2NE1 squishy balls here! Dara green ball ran so fast to get the tags things. XD

Dara so so so cute, hurrying to pick up the cup that Bommie threw, but got blown away. XD

It looks like SBS′ Running Man will have a battle between YG, JYP and Mystic89.

The stars were split up into teams according to their respective agencies, YG Entertainment, JYP Entertainment, and Mystic89, as they joined the original cast in completing missions.

The cast and guests were seen walking dogs and running around in scuba diving flippers, attracting large crowds of people to the filming site.

It is uncertain when the episode will air.

Photos: 140407 Fantaken Pics of 2NE1 Filming for Running Man~ So Excited for This!

WAAAAHHHHH!!!! The girls are going to be on Running Man again! I enjoyed their last guesting so much, I am so so so looking forward to this! ❤ And oh! They’re also filming with another idol group, 2PM! I wonder how our girls will interact with the guys? XD I think Park sisters stayed together for a task (?) while Minzy was with another group of people, and CL with another. ^_^ But all the girls belong to the same team, Green. ^_^ 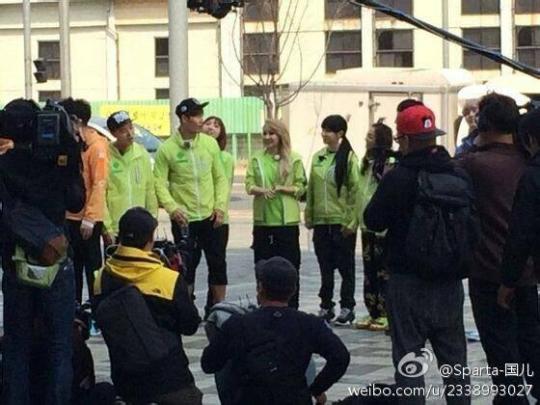 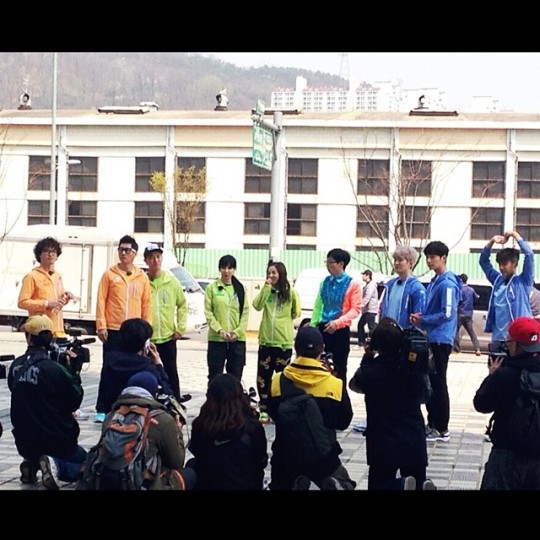 END_OF_DOCUMENT_TOKEN_TO_BE_REPLACED

Vacance here makes vacation! ^^ Don’t we all want to go on a vacation with Dara? She’s always #1 in our hearts!

On Friday, the MTV VMAJ’s official website showed that 2PM and 2NE1 will sing their hit Japanese songs at the awards ceremony, which will open at the Makuhari Messe Hall in Chiba on June 23.

At the event being hosted by popular Japanese electro trio Perfume, both K-pop idol groups will share the stage with internationally famous artists such as Exile, Miliyah Kato, J Soul Brothers III and Linkin Park.

Meanwhile, 2PM and 2NE1 received nominations at the MTV VMAJ 2012 in the best group video category, each with their music videos to “I’m Your Man” and “I am the Best.”

Several other K-pop acts including Girls’ Generation, KARA, SHINee and CNBLUE were also nominated at the music fest.

News: Sandara on a poll — “Who do fans want to have a drink with on a rainy day?”

Original Title: Who Do Fans Want To Have A Drink With On A Rainy Day?

﻿﻿Imagine that you’re having a cold rainy day and you want to feel cozy by having a drink with a star. Who would you choose to accompany you for a drink?

On the music portal site Bugs, 664 music fans participated in a survey, held from the 17th to the 23rd, asking “Which singer would you want to eat ‘pajeon’ and drink rice wine with on a rainy day?”

The Thai Prince, Nichkhun from 2PM topped the poll with 171 votes. For fans, the taste of the drink will be better if the handsome Nichkhun was there to accompany them.

The K-Pop queen who is also a CF model for an alcoholic beverage, Lee HyoRi came in as second. With her bubbly personality, fans think that the drinking session in the rainy day will be most fun with her.

Sandara Park from 2NE1 won the third place while After School‘s UEE who is also a alcoholic beverage CF model like Lee Hyori, was in fourth. Big Bang’s TaeYang and actress Yoon EunHye were also listed in the ranks.

Which star do you like to drink with in a rainy day?

Thanks to zhea and yap for the tip 🙂

News: Sandara Park- Upcoming Star with Most Potential to Succeed

Will these new idols capture the movies screens sooner or later as well?

Even in the district of Chungmuro, there has been a lot of interest in idols. Last year, Ga-in (from Brown Eyed Girls) appeared in the movie “My Love by My Side” directed by Park Jinpyo, revealing a new side of her. In addition, Top from Big Bang who showed his acting skills in the KBS2TV Drama ‘Iris’, starred in the movie “Into the Fire” in the second half of the year.

‘Idols who are good at acting’ are considered as rising stars full of possibilities. Most recently, Sandara Park (2NE1) and Taeckyeon (2PM) are receiving much attention from the public.

The interest in Sandara Park has started from the moment she debuted. She has been quite in demand, not only for movies, but also for dramas. She made a short appearance in last year’s MBC Drama “The Return of Iljimae”.

Sandara Park was suggested for the female lead role in the Korean version of ‘Step Up’ as the role called for a girl with an elegant and bright charm. Recently, rumours have been going around that she will be playing the opposing role to a renowned actor. Sandara Park’s several strengths include her fresh and innocent appearance and star quality, her singing and dancing and of course, her experience within the acting industry. She is being singled out as an actor with the most potential to succeed of the moment.