Jeremy’s fondness of the girls is <333. Dara retweeted this tweet too. ^^

Me2day: Dara Loves Her One Of A Kind Pink Sneakers!

Weee, see, Dara erally likes her sneakers! Now that it’s a better shot, I can now fully appreciate it. I think it’s really pretty! And as my favorite color is also pink, so I love this one too!

Twitter/Photo: Colorful 2NE1 with Jeremy Scott from Their Shoot in LA

Cute and colorful 2NE1 with Remy oppa~! ^_^ I wonder if what this shoot’s for. For a CF? Comeback? Sure hope it’s for a Korean Comeback or better yet, a US debut! Kyaaa~ Whatever it is, I’m excited! ^_^ 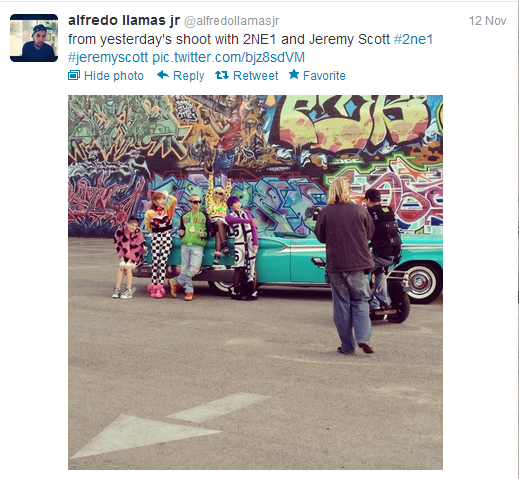 END_OF_DOCUMENT_TOKEN_TO_BE_REPLACED

Wow! Remy-oppa really knows that our Dara loves the color pink! The shoes are really cute, and really.. er.. pink! I’m sure Dara would love them! Kekekeke! ^^ 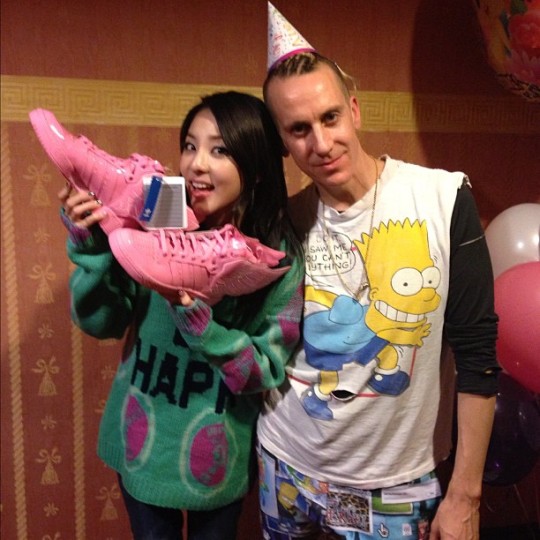 2NE1 and Jeremy Scott met-up together to celebrated Sandara Park‘s birthday. Sandara Park‘s surprised face as she received a birthday cake with her own face decorated on it was also revealed.

Wearing party hats, 2NE1 and Jeremy Scott seemed to be enjoying the fun and happy atmosphere of the birthday party.

Netizens who saw the updates responded with, “Everyone is having so much fun at Sandara Park’s birthday party” “Sandara Park is so happy” “Even Park Bom, CL, and Minzy’s smiles seem to have never left their faces,” “Jeremy Scott and 2NE1, doesn’t it seem like their friendship is no joke?” “They seem so close to each other,” Happy Birthday Sandara Park!” showing their hot reactions.

Oooohhhhhh, 2NE1! OMG Dara’s hair, I cannot. O_O Oh well, let us wait for a more HD pics before we panic, kekeke! I really think this is for another Adidas ad.. They’re too decked out in JS and Adidas for this to be their new MV that’s rumored to be shot in LA.. 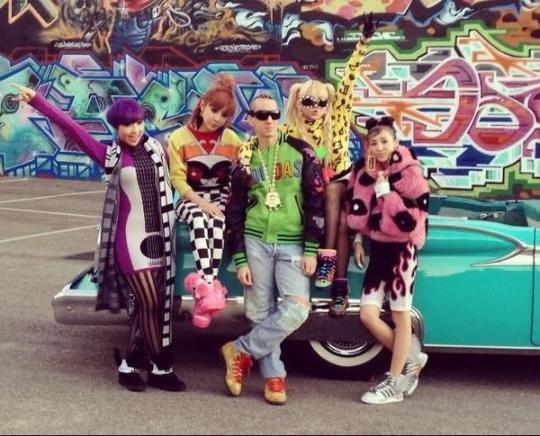 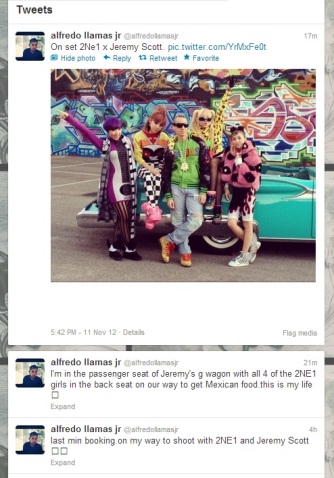 “CLEANING UP MY DESKTOP I FOUND SOME WORKING PHOTOS FROM THE 2NE1 TOUR COSTUMES HERE’S CUTIE DARA’S TRACKSUIT & KICKS.”

END_OF_DOCUMENT_TOKEN_TO_BE_REPLACED

I wonder how many concept photos Fault took of the girls? Kekeke! I think they shot pictures of them in their own clothes before they arrived, then had them change into the black, goth-ish outfits. And then into Jeremy Scott’s colorful collection. ^^

From a fantaken-pic of when the girls arrived at the shoot, we can see a glimpse of red soles for Dara’s shoes, so I’m betting she was wearing Louboutins. ^^ 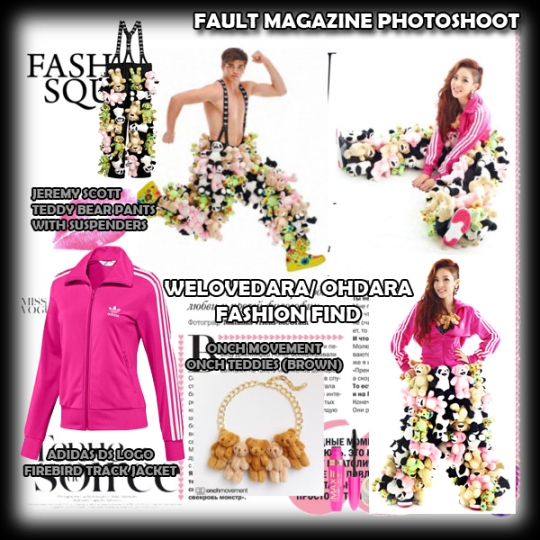 Please do not edit the pictures or the credit lines. Thank you. ^^

END_OF_DOCUMENT_TOKEN_TO_BE_REPLACED

Twitter/Cap: Perez Hilton: “It is time for another girl group to break out internationally…”

A twitter conversation between Perez Hilton and Jeremy Scott! ^_^

We are hoping its 2ne1 too!