Me2Day: Dara Enjoys a Play – “It was so fun I thought I would die of laughter!”

Dara updates again about the play and shares a photo ^^ 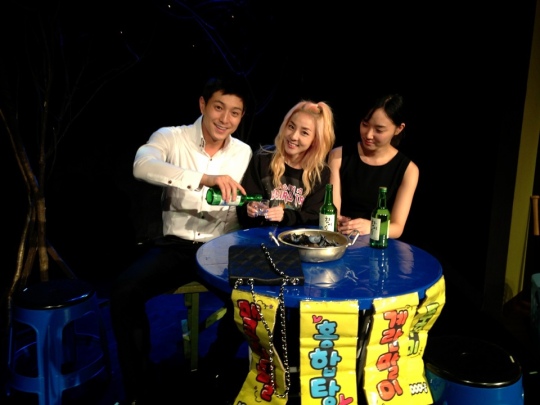 Dara enjoying cultural life! Today again, I have come to watch a good play at Daehak-ro! The last time I did, it was such a sad love that I have watched with tears but today’s play was so fun I thought I’d die of laughter kekeke Song Il Oppa’s powerful acting…!!!! The best!!! I’m also in the midst of enjoying it ^^

Every single happening in stars’ social media on Twitter, Facebook, Weibo or YouTube is the talk of the town for their ardent fans. Social media is becoming an effective tool for promoting themselves through word of mouth and communicating with their fans around the globe instantly.

Psy’s “Gangnam Style” went viral through YouTube last year, creating countless parodies around the world. It was also cited by world-famous celebrities including Tom Cruise, Britney Spears, and Anne Hathaway on their SNS, which fueled the worldwide sensation as well.

Major entertainment agencies here are making great use of digital media such as mircoblogs or YouTube as a marketing strategy.

SM Entertainment, the nation’s entertainment giant, opened its official YouTube page in 2009 to provide various music and visual content created by its stars to their overseas fans. As of this September, nearly 3.6 million people have subscribed to the page, the largest number among YouTube channels operated by Korean companies. Its official Twitter page “SMTOWN GLOBAL” has more than 1 million followers.

The second biggest agency, YG Entertainment, has also jumped on the “digital” bandwagon. “We especially encourage our stars to use their own SNS,” a YG spokesperson said.

Iconic K-pop star G-dragon recently opened an account on Weibo, a Chinese version of Twitter, with his followers already exceeding 600,000.
He was recently named as the most influential K-pop star, according to Treum, an online research company that analyzed SNS accounts of major Korean stars between April 25 and May 28. G-Dragon’s Twitter messages were reproduced more than 267,000 times by his followers during that period.

Super Junior’s Ryeo Wook was named the second most influential, followed by 2PM’s Nichkhun, and Super Junior’s Dong-hae, Choi Si-won and Eun-hyuk, and 2NE1’s vocalist Sandara Park (A/N: Dara ranks seventh, and is the only lady in the list stated in the article). 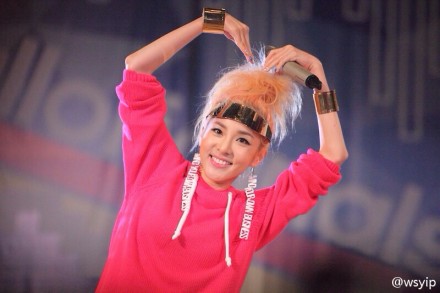 Lee Min-ho, who rocketed to stardom after performing in “Boys over Flowers,” a Japanese manga-based television drama series in 2009, is also a socialite in the SNS world. He is known as an SNS-savvy actor as he uses various accounts tailored for his international fans ― online messenger “Me2day” for Koreans, “Line” for Japanese fans and “Weibo” for Chinese fans.

Actor/singer Jang Keun-suk is an ardent user of SNS who has a wide fan base in various countries. Particularly, he boasts of the second largest number of followers after Psy for his Weibo account, which is regarded as a barometer of popularity in Chinese-speaking countries. He offers various stories and daily events for his international fans through diverse SNS channels.

“I feel much closer to him communicating via twitter and Facebook,” said Nirva Jang, living in Buenos Aires, a big fan of the actor. “Geographical distance becomes nothing. Jang as an artist shares a lot (with me) through SNS, and it makes us feel being part of his life.”

She found herself mesmerized by Korea while exploring Jang’s fan page. “I’d love to learn more about his beautiful country and traditions seeing his postings,” she said.

Patty Ab is another fan of the musician living in El Salvador. “Jang’s frequent activities on SNS show that he opens his mind to his fans. I also love that Jang calls foreign fans like me ‘eels’ since it sounds familiar,” she said.

2NE1’s mini-concert is also a recording for an American broadcast? O_O i wonder what for? But so excited for it anyways! ❤ 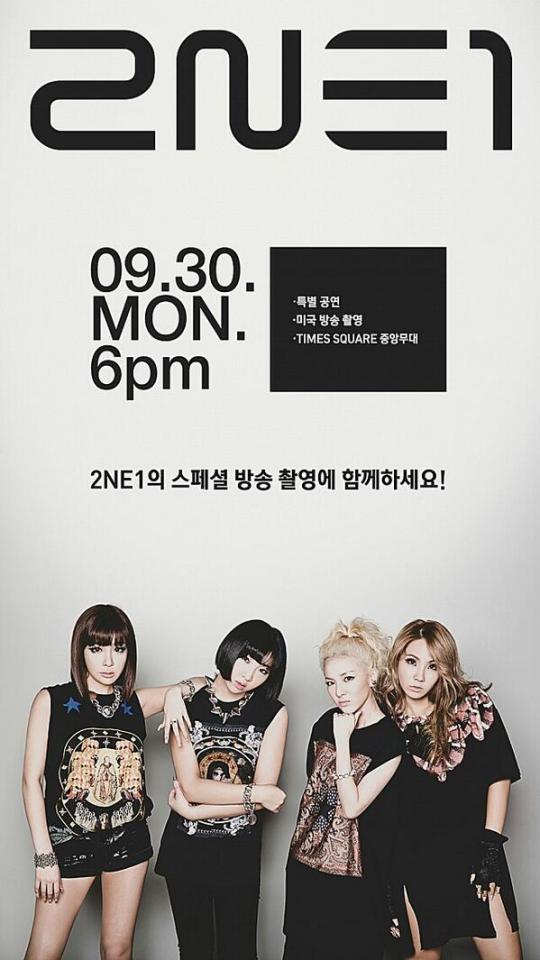 [2NE1] Today (Monday) at 6:00PM!!! 2NE1 will be going to Yeongdeungpo Times Square!!! They’ll be doing a guerilla concert performance for an American broadcast shooting ^^ YG mitu-friends who are near the area, you’ll go and show your support for 2NE1, right ^^? GO GO GO!!!

Me2day: Dara Updates her Me2day with Another Hilarious “Fighting!” Picture of Double Park

OMG they are just so cute and adorkable!!! ❤ 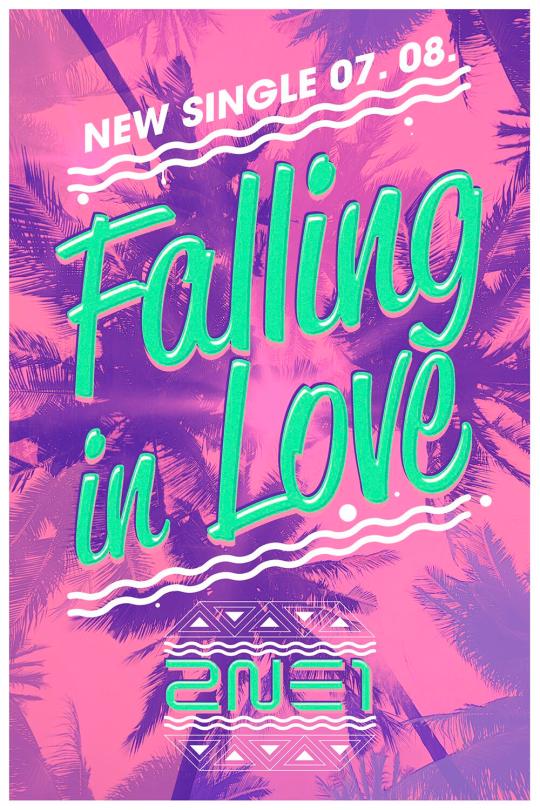 Me2day: Dara Asks, “Everybody, Are You Sand Lovers Too?”

And she uploaded the same picture, but this time on me2day, with a Korean heading. ^_^

In my car xdrover (T/N: She probably means “Land Rover” but she can’t spell out the brand) hat, you can see Sand Lover print, everybody, are you Sand Lovers too?!? ^.^

Dara went back to Chrome Hearts store in Shinsegae by herself, it seems! ^_^ Dara likes to patronize the products that they endorse, and sees to it that she actually goes and shops at the stores. I find it endearing, really! ^^ The shop must’ve not been open for items purchasing last night, so she came back today. ^_^ And yay! ME2DAY UPDATE!!! <333

Dara is so cute, promoting CL’s Baddest Female single. ^^ And oohhh, so the song was finished even when they appeared as Snoop Dogg’s guest performers at the Adidas concert? ^_^

Click HERE for the video or on the screencap below! ^^

She updated her me2day with the same vid too!

Dara had tweeted first, using a YFrog video, but she must’ve known that it was not loading, so she transferred to Telly. Bommie went and copy-pasted her tweet in full! Haha! It’s so cute, these two, and then tweeted her, telling Dara all about what she did. ^^ Again, the screencap shows the newer tweets on top. So the second tweet is the one that Bom first updated with. ^^

We love you too Dara-ah! <333 She has 2NE1’s signs all over! Keke~ On her beanie, and also on her nails. ♥ Dara you look so pretty and young! Baby-faced Dara is forever young! ❤ 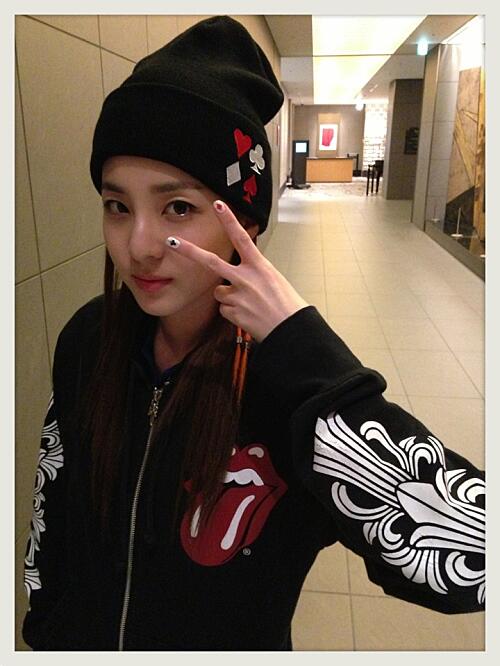 OMG Dara what is she doing? XD Such a dork! ^^ Is it just me or does this have a slightly horror-ish feel to it? ^^

Whether it rained or it snowed, whether the wind blows, this place will always remain. Would you like to take a healing souvenir picture too~?