In MBC ‘Music Core’ aired on 31th, 2NE1 had outfit with unique color and pattern. CL wore a top with silver and red tassel and Minzy wore a waist-cut dress.

‘Do You Love Me‘ is a song with exciting beat that goes well with 2NE1 member’s voices. YG Entertainment‘s main producer TEDDY was in charge of the writing and composing of the song.

Currently, 2NE1 is continuing on with their marketing strategy of releasing a song every month starting with ‘Falling in Love’ in July. The song released in August was ‘Do You Love Me.’

Video: 130810 Another Fancam of 2NE1’s “Do You Love Me” Performance at Music Core in Sokcho

Another fancam, in a different angle from the previous ones. ^^

YAY! Finally have some Dara focused fancams of Dara performing Do You Love Me and Falling In Love! ^^ I love fancams of performances because you can focus on her moves and voice and nuances. XD I love fancams in general, I really can see that fans capture an extra something special that official broadcast videos cannot. XD

Video: 130810 Fancam of Cute 2NE1 Behind the Scenes during Music Core Rehearsals

Aww, Dara is so cute! She kept on practicing her dance steps even before going up to the stage. XD If she’s like me, the music must’ve been playing in her mind while she did the steps. ^_^

Oohhh, am I the only one loving her pink, gold, and blue braids? ^^ So pretty! 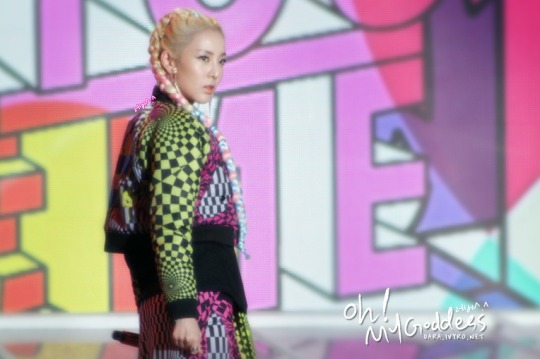 Before recording! So so so beautiful. T_T /le cries

Check out more and more pics of our gorgeous blonde Goddess Dara at OhMyGoddess!

That moment when fancams take better footage than the official broadcast. Kekeke! ^^ And we can hear the screams more properly too. ^^

Aww the girls are just so cute with their outfits for this performance! ^^ And love how energetic and fun they look on stage. ^^ 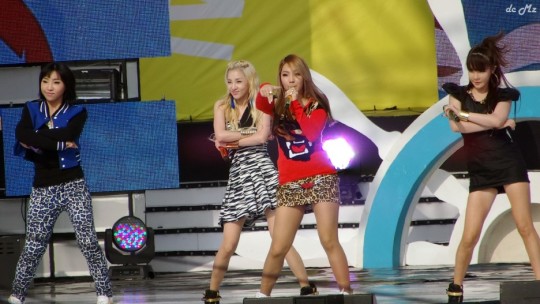 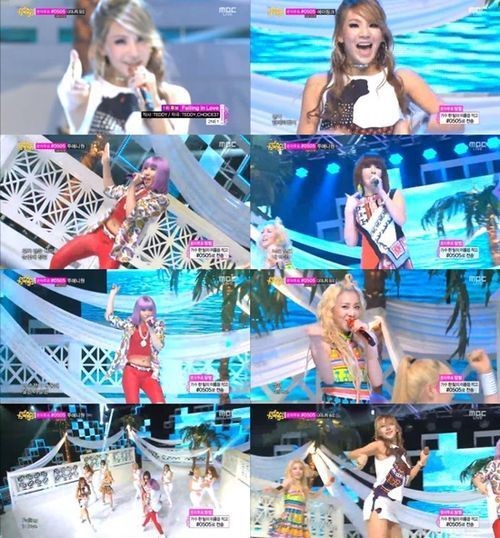 In MBC ‘Show! Music Core’ that was aired on 20th, 2NE1 performed along ‘Falling in Love.’

2NE1 wore glamorous and refreshing outfit that gives feeling of being in the center of Hawaii. 2NE1 boasted their upgraded looks overwhelming the audience.

2NE1‘s choreography that looks like they are really enjoying the stage despite its perfection in the performance along with their live singing grabbed the attention. Moreover, the combination of 2NE1‘s smile, outfit, and choreography was great enough to get the audiences enjoy the stage with them.

‘Falling in Love’ is a reggae style dance song. 2NE1‘s challenge is highly appreciated since reggae failed to draw much interest in Korea until now. With the new genre, 2NE1 worked with the newly rising Japanese choreographer to combine original moves in the performance. Their challenge is being favorably received by music fans.

Starting with ‘Falling In Love,’ 2NE1 is planning on releasing a new song every month until October. 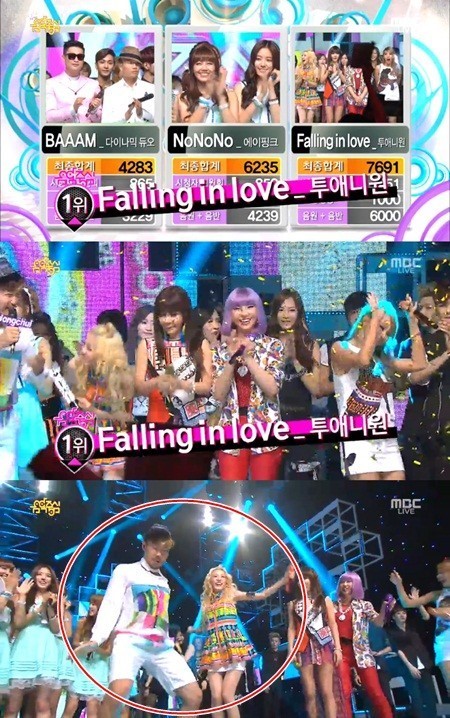 2NE1’s achievement comes in a competition against Dynamic Duo and A Pink who were also contestants for #1 trophy. They celebrated their award-receiving at MBC’s Show! Music Center on July 20. As a ceremonial show, 2NE1 did a ‘whack dance’ in front of the audience.

2NE1, dressed in colorful outfits that highlighted their individuality, promised in an interview before the show, “If we win, we will do a ‘whack dance’ with Roh Hong-chul!”

After their comment in this interview, many expected them to win to see the whack dance. When their name was called for #1 award, DARA first thanked the CEO of YG Entertainment, Yang Hyun-suk, then actually went on to do the promised ‘whack dance’ with Roh Hong-chul. She first seemed shy about it, but in a few seconds she was doing a perfect whack dance with Roh swinging her body with both her arms wide open. The audience burst out into laughter.

At Show! Music Center on the day, other artists including Infinite, Dynamic Duo, 4 Minute, A Pink, Ailee, Girl’s Day, Henry, Jewelry, Geeks, Sunny Hill, My Name and A Prince were on the show for dynamic performances.

Here we go again! Let me just say, Dara sure gathered so many news articles over the weekend. T_T Being stuck without a PC sucks. T_T

Sandara Park, Awkwardness With A Cat? “I Hope We Can Be Close” 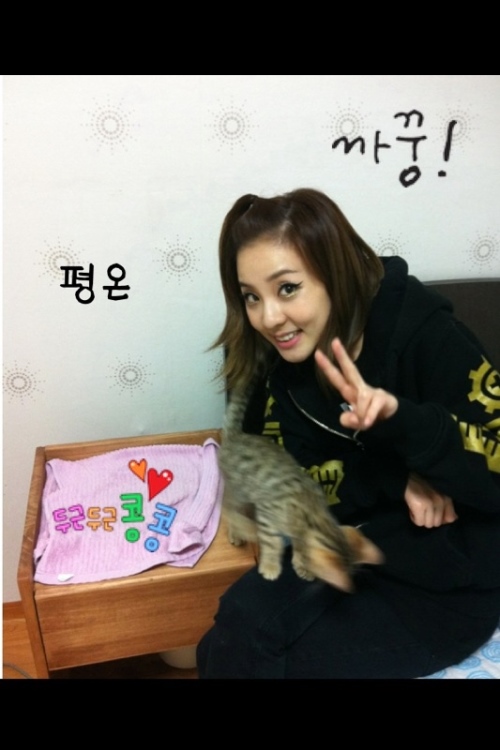 On a me2day update earlier today, at 1:00PM, Sandara Park said, “Yesterday when I went home after a long time, and met Dadung again, look at Dadung-i who’s trying to catch my hands… I’ve decided to just hold him,” she said, following it with, “The start was quite favorable… And with a calm look, I went nearer! Do you expect that I would be calm until the end?” revealing a picture with her text update.

In the photo, Sandara Park has her hand raised while Dadung is seen on top of her lap. Its tail is near Sandara Park’s mouth, and though she looke calm and even gave the V sign, she could not hide her look that seemed a bit tense. 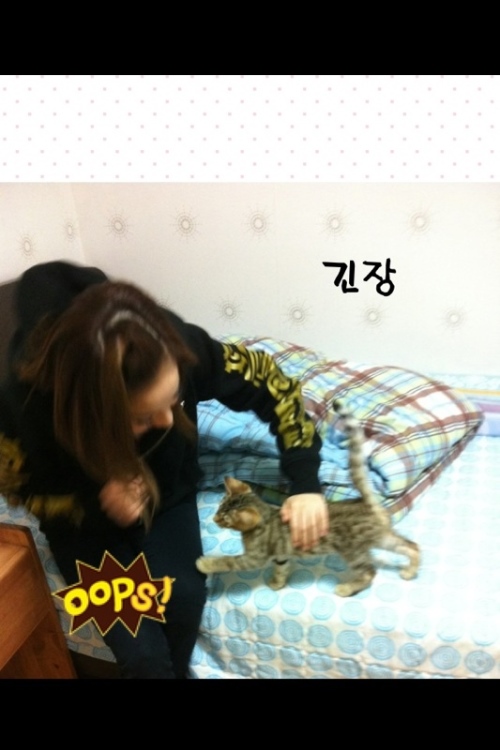 Sandara Park followed this with, “The attempts to approach, so far so good… Becoming nervous a bit! Dadung is approaching…. He’s becoming close to me don’t you think. Haha!” adding another picture.

In the photo, Sandara Park seemed to have flinched in surprise when the cat approached her.

Netizens who saw the picture commented with, “In the future, take it slow when being close,” “I don’t know which is cuter, Sandara Park, or the cat,” “Don’t be scared, I really wish that you and Dadung would not lose your closeness,” showing their response.

Meanwhile, on July 31 for SBS “Inkigayo,” 2NE1 had their first stage for their new song, “Ugly,” attracting attention with their strong performance. 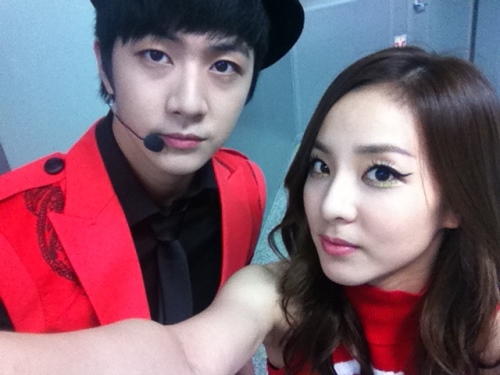 On the 31st, Sandara Park updated her me2day with a picture of herself and her brother, Thunder with the words, “Hate You and Ugly’s performances have just finished! From now on~ we will really enjoy playing and having a good time!” in her post.

After that, she followed with, “Earlier at the waiting room, a click with Dog Poop! Today, after a long time, I was able to meet with Dog Poop as his oldest sister without being embarrassed! My appearance here is awkward, but sometimes the look matches the event,” she said. Usually wearing unconventional costumes and hairstyles for their concept, however on this day, Sandara Park’s beauty shone because of the attractive concept that they had on for “Hate You.”

In the photo, Sandara Park and Thunder are still wearing the costume and make-up that they had when they were on-stage, both were wearing a red costume, giving an impression of a couple look.

Netizens who saw the photo commented with, “Such superior siblings,” “Oldest sister should never be embarrasssed,” “The younger brother resembles the eldest noona so much!” “Dung-i oppa and Dara unnie have a lot in common,” “Your stage yesterday was really cool,” “Two people who look really alike,” “Dominant genes,” “Sandara Park looks so innocent,” “Both Sandara Park and Thunder are cute,” “A strong force for promoting both groups,” showing a hot reaction.

Meanwhile, 2NE1 had their comeback stage for their title track, “UGLY” yesterday, with a performance of “Hate You.”

Group 2NE1 has caught the attention of viewers with their awesome energy.

On July 31, in the live broadcast of SBS “Inkigayo,” 2NE1‘s overflowing charisma filled up the stage.

On that day, 2NE1 presented “Hate You” prior to their debut performance of their title song. With red being their main point, paired with leggings, 2NE1 strutted their costumes with their nergetic performance rocking the stage.

They continued, performing “Ugly” on stage, wearing their costumes with colorful unique prints being their point; they gave a powerful performance. They also caught the attention of viewers with the freedom that they showed on stage. Sandara Park especially commanded attention with her hat that was decorated with tassles that looked like jumping ropes everytime she moved.

Their title track, “UGLY” is a song about beautiful appearances in the eyes of other people, but having a wounded heart. It is a mix of electronic and rock sound with an upbeat tempo, which truly makes 2NE1’s song appealing. 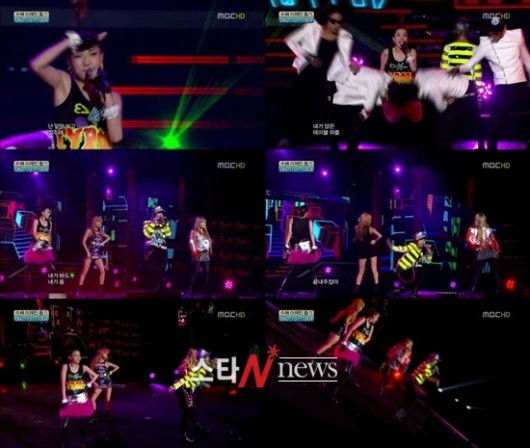 On the 30th, for the broadcast of MBC music show “Show! Music Core” 2NE1 performed “I Am The Best” showing a unique, stylishly modern stage.

2NE1 has always received a lot of love from fans for their unique fashion and hairstyles. With her radical hairstyles on every stage, Sandara Park introduced a unique fashion with the pink skirt. 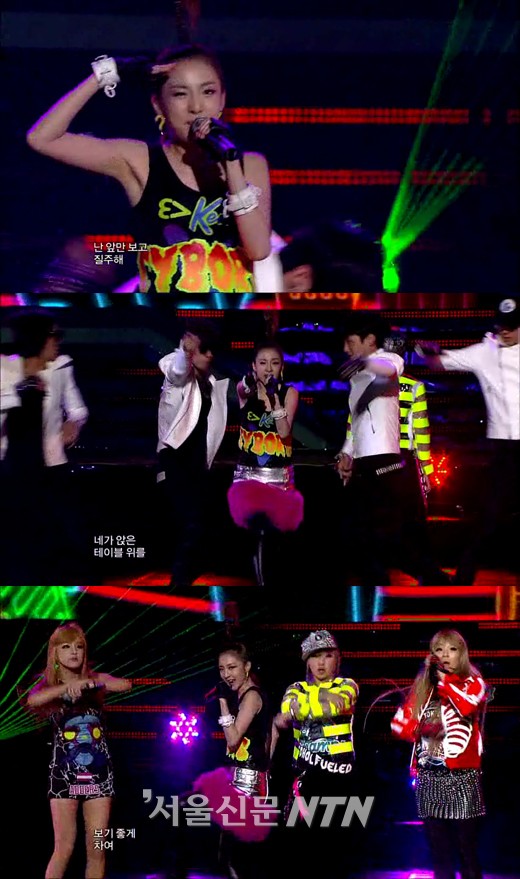 For that day’s stage, Sandara Park wore a short skirt, with a silver-colored top, highlighted with a brilliantly pink colored hem, showing a unique and striking fashion that captivated the attention of viewers.

In addition, instead of her “Vegeta Hairstyle,” this time, Sandara Park sported her famous “Palm Tree Hairstyle,” which highlighted her individual charm and appeal. Sandara made the hairstyle famous in 2009, when she started appearing in events for Fire with the style. And with her sleeveless T-shirt, silver and pink miniskirt, and black leggings, she surely boasted a colorful stage costume.

After the broadcast, netizens commented with, “This is a style only Sandara Park could pull off,” “Sandara Park is the only person who can pull off the palm tree hairstyle and still look pretty,” “2NE1 is the best!” “The pink skirt is daebak!” “You are cute in anything!” showing their favorable response.

Last month, on the 29th, Sandara Park revealed her own translations for the lyrics of 2NE1’s single, “Ugly.”

Sandara Park updated with, “To help everyone become more familiar with the English lyrics of UGLY, Teacher Ssan has come to help you!” she said, “The transformation into a teacher! Now, if you are just starting out, it would be easier to just follow along with the pronunciation found here, and then understand it bit by bit! Now let’s learn the English language together,” she said.

On the photo, Sandara Park wrote a handwritten note on the English lyrics of Ugly, showing the translation and her own interpretation for pronunciation.

Her cute handwriting and character drawing, decorated with stickers, were really eye-catching.

Netizens who saw the “Ugly” translations commented with, “Now if you were really the teacher who’s tutoring me,” “Studying English suddenly became easy,” “My English skills have become a bit better,” “Cute,” “Dara-unnie is full of sense! Overcoming English seems to be less troublesome,” “Thanks to Teacher Ssan, English seems to be easier,” “If Sandara Park were teaching me English, I’d do nothing else all day, just study English (T/N: LOLOL! I am with you, dude!),” “Teacher! This has got to be the easiest English I’ev ever seen!” “With your full sense in English, you should be YG’s PR Director,” “I’m very lucky to be a fan of a singer like you,” they said, showing an excitement and anticipation for the title track.

Again, we love to hear from you! If you have requests, you can tell us at the TIPS section or the comments section here. ^_^ Thanks! ^_^

Video: 2NE1 Performs I AM THE BEST on Music Core! 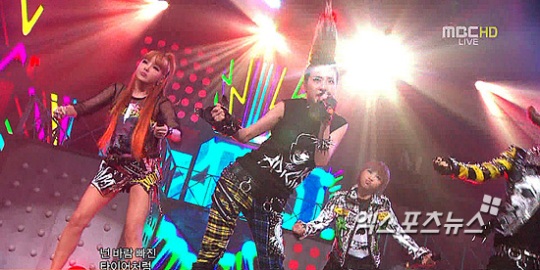 This is the first time I actually streamed a music show from start to finish. Suffice to say I was very very relieved when 2NE1 finally came in with their fierce and unique stage! And this is not even my bias speaking. Their music and swag are definitely something else!

And oh, Dara’s HAIRRR! OMG! I thought it was her Vegeta hair at first, then she turned sideways and I was like, OMG, four spikes?! LOL! The Korean media are calling it “Sonic” hairstyle, after Sonic the hedgehog. ^_^ 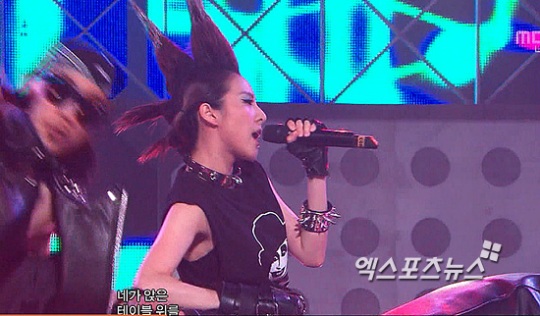 Check out our girls’ awesome performance!

What did you think of today’s perf and Dara’s hair for today? ^_^ Come and tell us in the comments section! ^^