Archive for the ‘Audio’ Category

Last night, 2NE1 guested in K Generation radio! This is their first radio guesting to promote “CRUSH” Japanese version album! Give it a listen because we can hear the Japanese versions of their songs from “CRUSH” album, specifically “Crush” at 2:27, “Come Back Home” at 9:38, “I Love You” at 17:56, “Happy” at 27:40, and “Gotta Be You” at 50:08.. ^_^ The girls all sound so cute speaking in Japanese! Dara has improved a lot, and I’m happy she’s more confident speaking in Japanese this time. ^^ It’s cute how she asked Minzy and CL how to say some words when she spoke in long sentences. ^^ 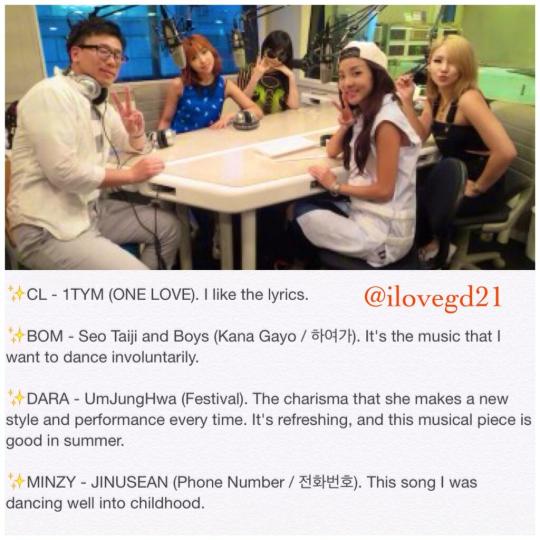 Dara: While recording “Crush,” I got so excited that I danced a lot. There’s a video and photo for it… Instagram~

DJ: Which member is most popular with guys? (I think this is the ques)
CL: It depends on what kind of guy
DJ: Have you heard this ques before?

CL: So among which kind of guys are we each popular in?
Dara: Baby…
DJ: Baby?
Bom: Baby?! /CL dies laughing/
Dara: Uhm… I’m popular among younger guys (or people).
DJ: Ah, younger guys.
Dara: Little boys.
Minzy: Guys in middle or high school.
Bom: CL is the most popular with guys.
Dara: Oooh~
CL: That’s wrong.
DJ: She’s sexy…
CL: /aajdajdurghhh/
DJ: What about with Minzy?
Minzy: Which type am I most popular with?
Dara: Wildeu~ wildeu~
Bom: In America…!
DJ: Ah, she’s famous in US?
DJ: She’s most popular with guys in America?
Minzy: Pass!
Bom: Though I’m not sure. /talking talking/
CL: Ah, let’s pass.

DJ (in Eng): Sharina, from Firipin.
2NE1: Oooh~
DJ: From Philippines, huh.That’s amazing. Dara-san?
Dara: Hai, I’m from the Philippines.
Dara: Kamusta ka
DJ: Did you ask what theyre doing?
Dara: No It means “How are you”
DJ: I thought you asked what they’re doing
Minzy: Me too

DJ: This is for CL about 2NE1’s lyrics, about real love experience.
(then CL says something about it being a good question & about creative)

DJ: Where does 2NE1 get inspiration from?
CL: From KR, right? For me, it’s our producer, 1TYM’s Teddy. I listen to them.
DJ: What about Bom?
Bom: Mine is our president.
DJ: President?
Bom: Seo Taeji and Boys’ “Hayeoga.” It was so popular when I was a kid.
DJ: Is there a reason why you like “Hayeoga?”
Bom: It makes me want to dance.
DJ: What about Minzy?
Minzy: Mine is JINUSEAN /DJ says something about YG Fam being awesome/
DJ: JINUSEAN has a lot of hit songs but which one’s your fave?
Minzy: Mine is “Phone Number”
DJ: I know that~
DJ: Why that song?
Minzy: I listened(?) to it a lot when I was a kid.
DJ: You guys liked(?) YG since you were little, huh?
Dara: I really like Uhm Junghwa-unni.
DJ: Ah, Korea’s Madonna.
Dara: Hai. /Dara tries to speak Jap w/CL & Minzy’s help/
Dara: Uhm Junghwa-unni usually has new style or perf so I really like her. Most of the time, she’s really sexy and charismatic…
Dara had a hard time saying such a long sentence in Japanese and Minzy/CL helped her, when she finished, Minzy’s like, “You worked hard.”

DJ: It’s time to wrap up.
2NE1: Aweeee
CL: That was short. (Talks about their Japanese schedule like concerts, etc)
DJ: You had AON concert in so many countries, how are the fans different?
CL: Some are bit different but overall, they have passion.

DJ: What preparations do you for your concert?
CL: We prepare to play… NOLJA!

Bom’s message: To all Japanese fans, I wanted to see you all. Until our concert, I will work hard with my Japanese.
DJ: Wah, compared to your last fanmeeting, Bom-chan, you’re much better (in Jap) now.
Bom: Really?

Minzy: Many of our fans have waiting a long time, we also waited a long time. We prepared a lot of things, so please come (to our concert).

Audio/Line: Dara Shares an Incomplete Story on How to Imitate YG + Audio Updates from Ssangpark

END_OF_DOCUMENT_TOKEN_TO_BE_REPLACED

Hahaha, Bommie and Minzy teasing Dara! ❤ So so so cute! I really hope they’d actually share a stage and interact more in the future! ^^

And the last teaser was dropped! Pretty, pretty Bommie unnie and her amazing voice! Can’t wait to hear the full song! I wonder if YG is gonna release any video teaser for the mv aside from this audio ones. Can’t wait for the 21st! ^^

“My youthful days of love end like this. You should be happy..”

OH. MY. GOSH. Mindblown by how beautiful she is in the teaser!!! How can she get even more perfect?! T_T And OMG OMG OMG her voice! While I love my Dara high notes (because she can reach them high notes like nobody’s business i.e. I Love You, ooohhh ooohhhh! And FIN acoustic version), I do love it when she sings in lower registers.. It might be a bit of a challenge since it’s not really her pitch, but she does it so so so well! T_T /le cries

“I hate the calculative love of the elder people”

Oh my gosh, Minzy sounds so amazing! ^^ I love her high notes and falsettos.. T_T Minzy maknae, you’re really something else! ^^

They’re releasing teasers one after the other. Minzy’s was released 10 hours after CL’s, kekeke. So maybe we can expect another one, either for Dara or Bom, in roughly 10 hours? Or maybe later at midnight? ^^ Can’t wait, so excited! ^_______^