Awww look at our cute bb with her cat! ❤

END_OF_DOCUMENT_TOKEN_TO_BE_REPLACED

Dara sure had a busy time in Singapore! And I’m really happy she updated all of us.. ❤ Look at her bag, so full of YG Family goodies! There are some stickers given to her by OhMygoddess and San Union! ❤ I also spot Psy, Mino, Hanbin, Sugarman, and some others.. ❤

Dara who will go on a business trip 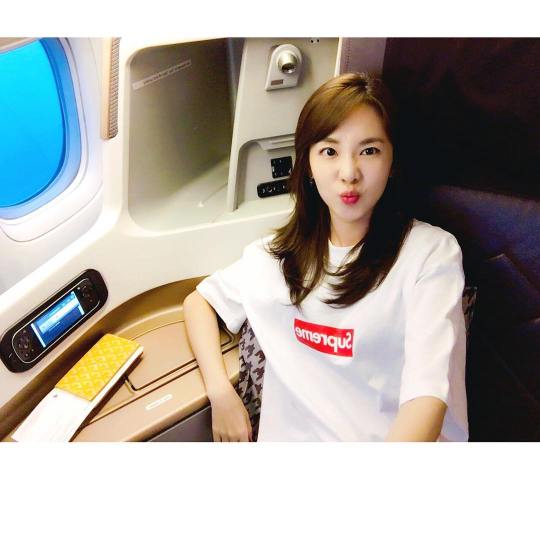 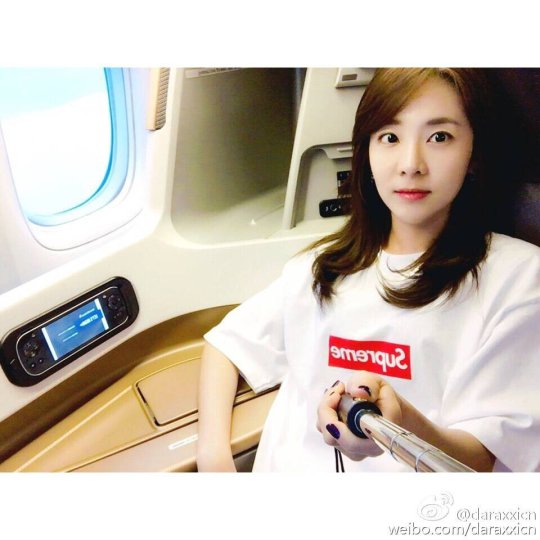 The next day, she’s off to work! She did some photoshoots, and some people confirmed it’s for Primo Jordan, the store where she gets almost all her kicks.. ^^

Singapore’s crab~!!! Did you eat dinner?!

And off she goes! She looks great in her casual clothes! Loving her cartoon-styled casuals these days.. ❤ 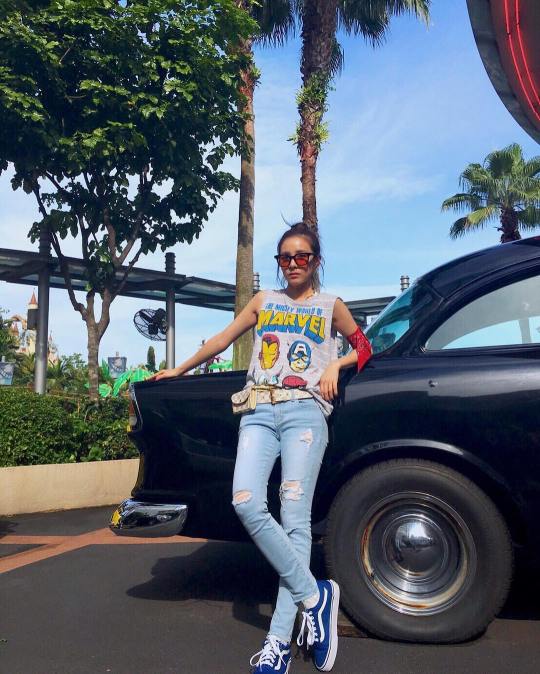 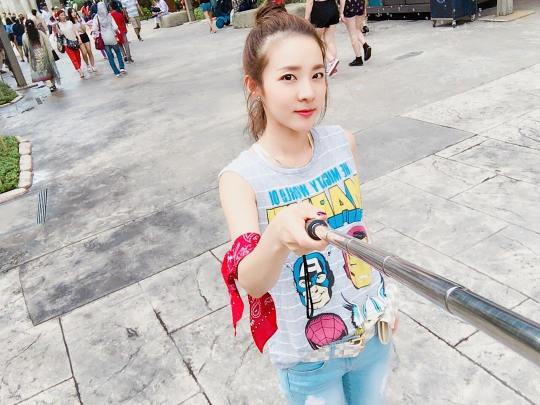 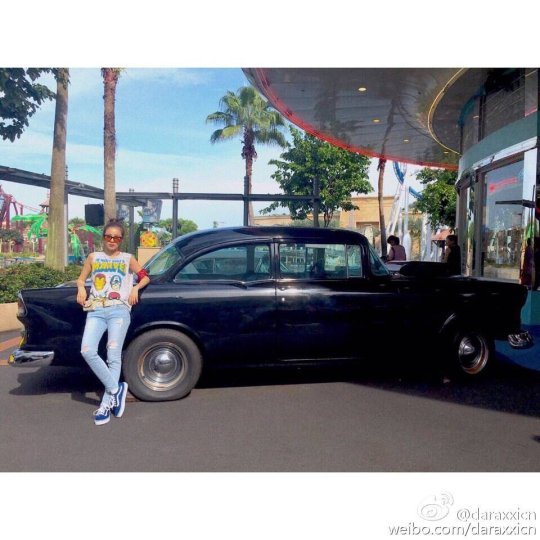 And she goes cute casual with a plaid shirt, hair down in a half pony.. ❤ Comfortable and casual, yet fashionable still! 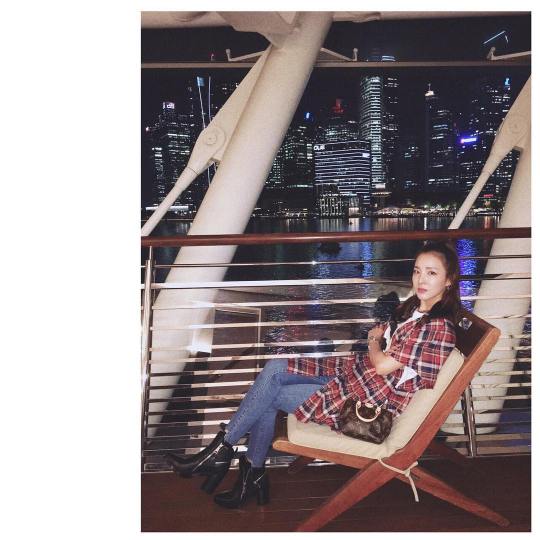 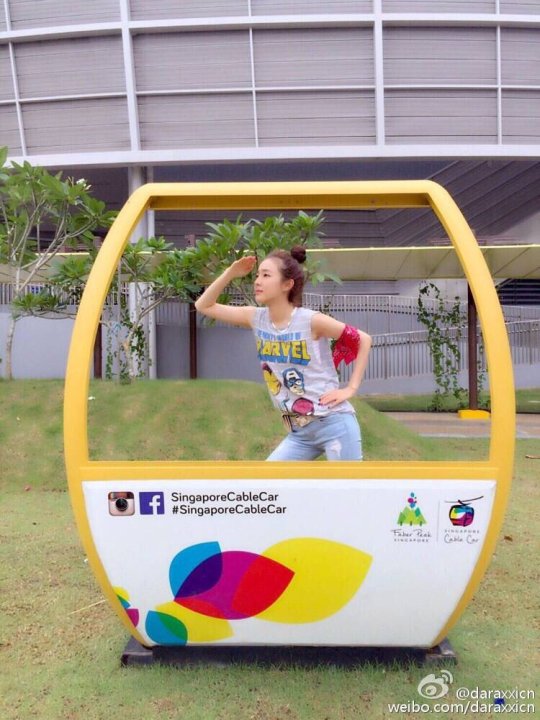 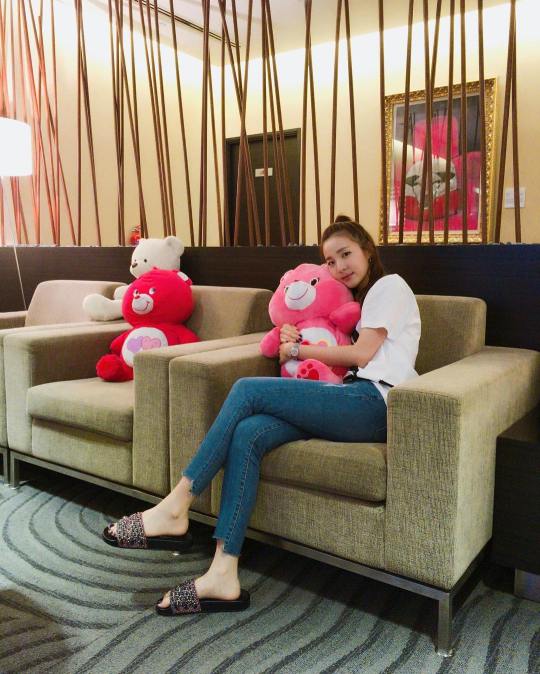 Article/Interview: Today Online Singapore~ “2NE1’s Dara Reveals her Eyeliner Disasters, Why She Loves Make-Up More than Chocolate, and Getting Teased by G-Dragon”

Another interesting read! ❤ I like how casual this interview seemed and how the article was written. ^^ I can just imagine the easy banter Dara and GD have! YG Family seems really close.. XD I remember the way Taeyang teased Dara too, even Seungri and Dae tease her a lot.. XD

2NE1’s Dara says she can’t put on eyeliner by herself.

SINGAPORE – For someone who always looks so put-together, 2NE1’s Sandara Park admitted that she is, like most regular girls, actually hopeless at applying her own eyeliner.

Affectionately known as “Dara”, the 31-year-old was in Singapore for the launch of cosmetics brand moonshot’s new products, the Microfit Cushion and the Moonflash Cushion, both available at Sephora. The moonshot brand is from YG Plus, the lifestyle subsidiary of YG Entertainment, which is the label to which Park is signed.

While she’s here, you just might catch her having fun at Universal Studios Singapore (“I always go to USS”, she said) or eating chilli crab and pepper crab at Jumbo Seafood. “Jumbo is my favourite restaurant,” she enthused.

She added: “That’s why I use the cushion, and lip gloss. I’m really into the Moonflash cushion right now because it makes your skin look so much fresher, and it’s really easy to use. I think skin is the most important thing when you do your make-up, because if you have nice skin, you will look good in any make-up.”

What if she had to choose between giving up make-up and giving up chocolate? “It’s really hard to pick. But maybe I’m going to give up chocolate – for now,” she sighed.

And no, they don’t fight over who has better skin. But, she revealed, “He’s always teasing me about anything and everything. He’s really naughty. And he’s really funny.”

We’re not sure if they tease each other about their eyeliner, but that may be a moot point because Park predicts the next makeup trend will be the barely-there look. “I think nude make-up is really nice, and I think that will be the trend for this year – very natural make-up that looks like you don’t have make-up on,” she said.

And, with her new Moonflash Cushion, “everybody can look like me,” she laughed.

Even while eating chilli or pepper crab.

The Microfit Cushion and the Moonflash Cushion by moonshot are available at Sephora.

Must-read! They had some great, out-of-the-box questions for Dara and I really appreciated how they gave us a glimpse into her mind. I’m glad they didn’t stick to the usual beauty questions, despite what the title might suggest. ^^ 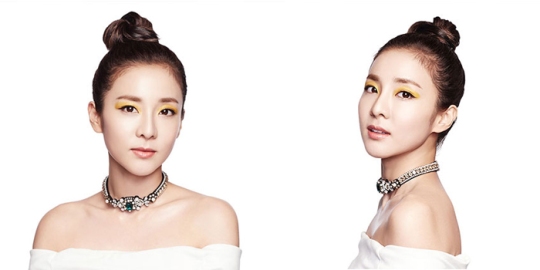 Last week, international K-pop sensation Sandara Park (Dara, for short) was in town for the launch of Moonshot’s new products: the Microfit Cushion and the Moonflash Cushion. We sat down with the brand’s recently appointed ambassador to talk beauty must-haves, skincare secrets, and Instagram filters.

I found out that I can use the Moonflash Cushion not only as a highlighter but also as a make-up primer before using make-up.

What’s one make-up product you cannot live without?

I’m using Moonshot’s UV bouncer everyday before applying my make up. Its like a sun block and at a same time, a make up primer – it’ll make you look even prettier.

How do you maintain your perfect skin?

Drink a lot of water and sleep a lot – that is really important. And positive energy! 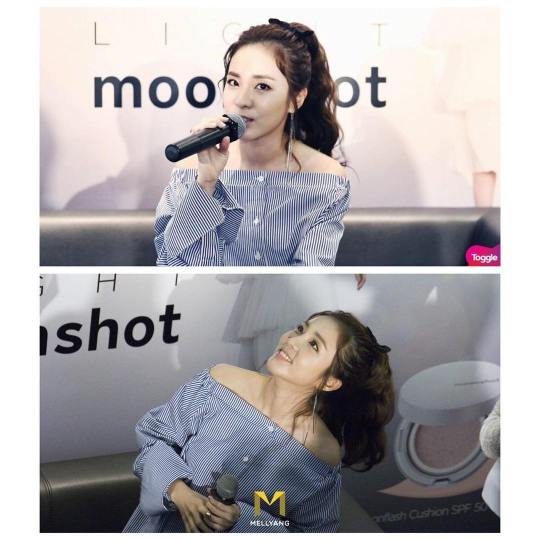 What’s your favourite way to relax?

I love being a tourist – I love trying out new things, new food and new places.

Name the place(s) in Singapore that you would love to see.

I want to go to Gardens By The Bay, Clarke Quay and The Merlion Statue. 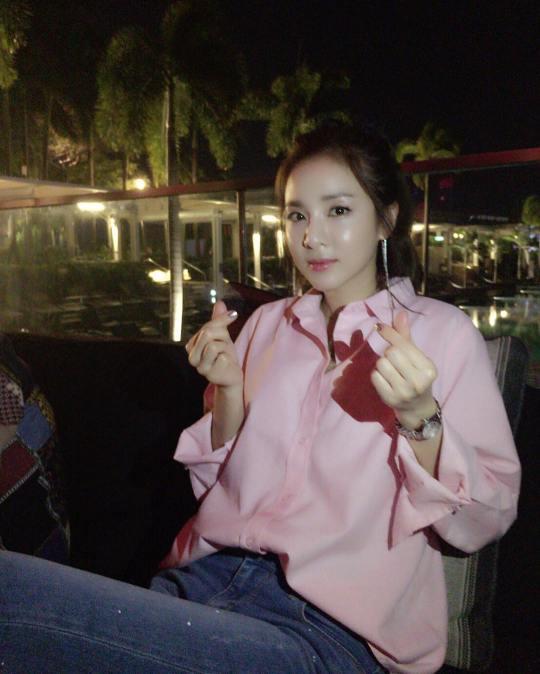 Where in the world would you want to visit the most?

If you could meet anyone, who would it be?

I want to meet my high school crush because I miss myself; the young innocent Dara.

Dara looks so so so pretty! ❤ I think the pink top she’s wearing is from Penshoppe! So PR director Dara strikes again! ❤ And moonshot Dara cushion of course.. ❤

Bet it was Dara who suggested they take a photo, she’s so lovely and friendly.. ^^

This is literally the first interview I’ve done where you’re only allowed to take pictures WITH the talent, not OF them. I was so flummoxed, I got lured into this ✌️ shot, which I may or may not regret. #OhWell#SandaraPark #EvidentlyMyNewHomie

RE-uploaded by: OhDara via officialwelovedara

Dara spotted at the zoo and at Gerry’s Grill in Singapore the day after her event for moonshot.. ❤

Dara went to a zoo, Gerry’s Grill, and Madame Tussaud’s wax museum on her second day in Singapore.. ❤ 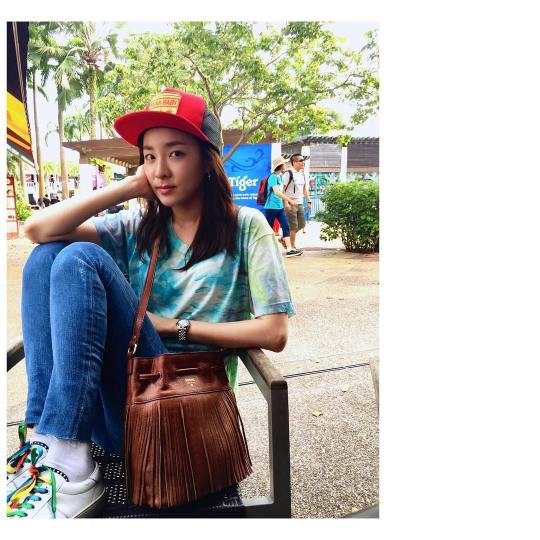 #moonshot #malaysia ✔️#singapore ✔️ thank you so much for your love & support. 🙏 til next time…

Instagram+Weibo: Pretty, Grateful Dara Thanks Moonshot and Blackjack Singapore for the Warm and Fun Stay

Dara enjoyed her stay at Singapore so much! ❤ She uploaded a lot and seemed very happy to see all the fans.. ❤ Thanks also to everyone who made her stay such a fun and warm one.. ❤

Thank you Blackjack Singapore!!! Thank you Moonshot 🙏 Love u!!! #DaraInSG 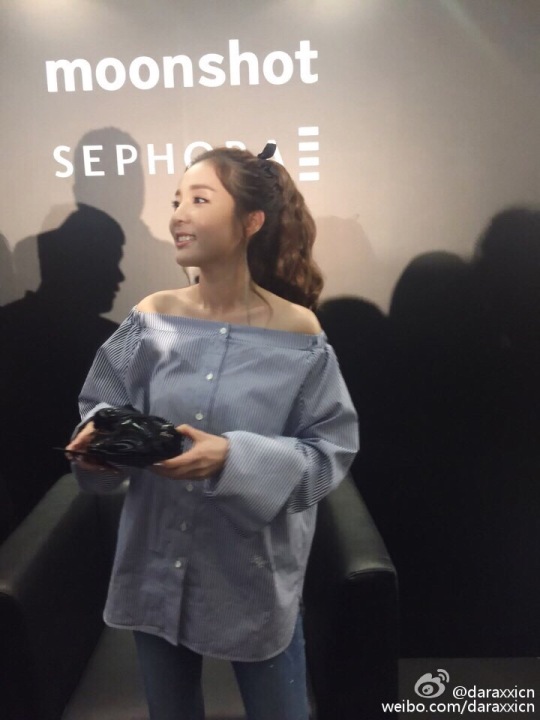 OMG Dara looked so so so freaking gorgeous at the moonshot launch in Singapore! ❤ The stylists really did a great job for her on the two day promotional events in Malaysia and Singapore, so kudos to them! ❤

I love how casual yet sexy and fashionable and chic Dara was in her SG outfit! Her face glows, I love her wavy ponytail, and I really like how her top showed off her sexy shoulders and collarbones! Also, kudos to everyone who shared and took pictures! ❤ 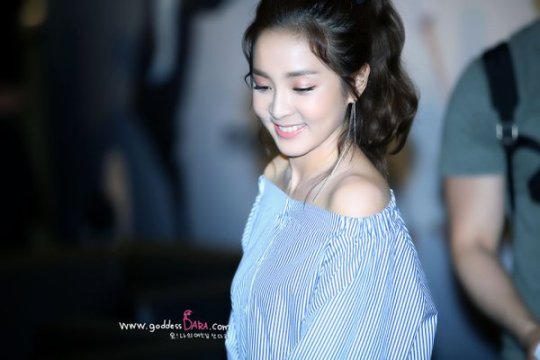 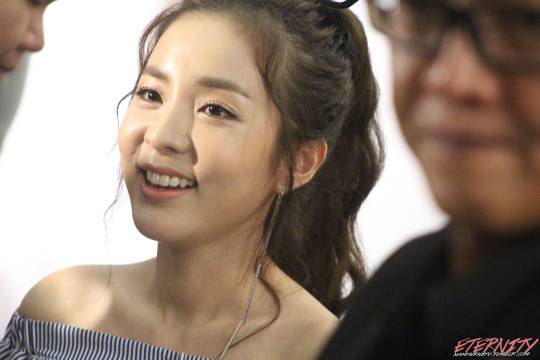 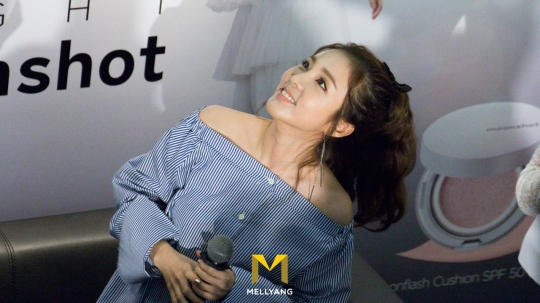 More and more after the cut!