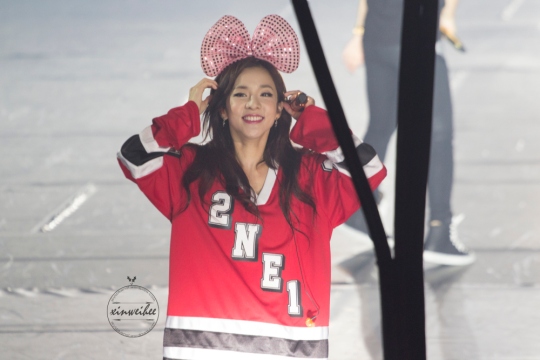 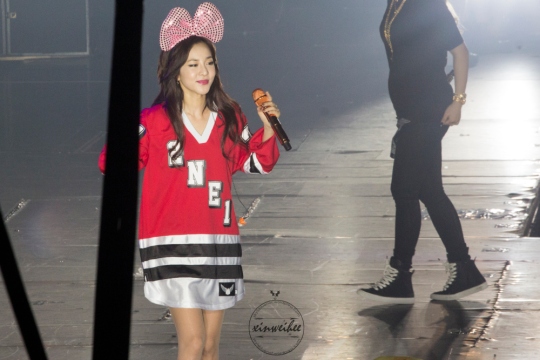 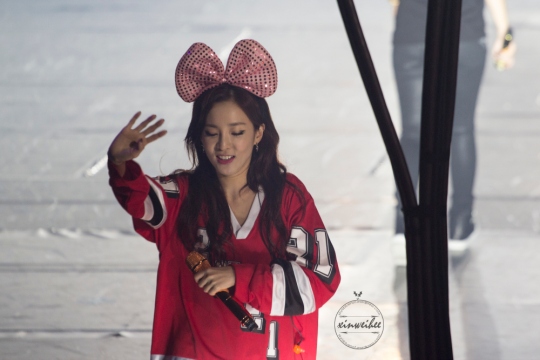 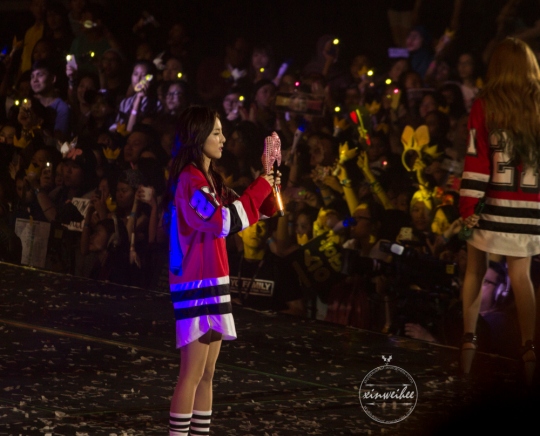 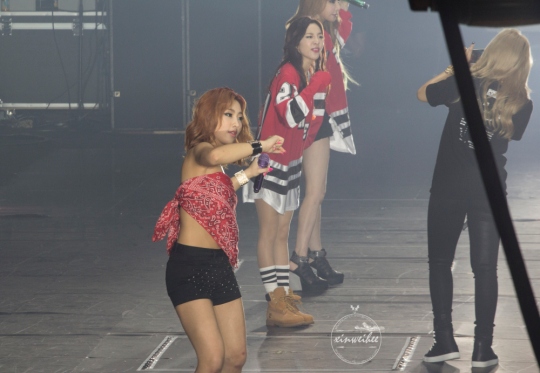 Check out more pictures after the cut! More Dara, 2NE1, and YG Family!

END_OF_DOCUMENT_TOKEN_TO_BE_REPLACED

Day 2 of YG Family concert in Singapore finished successfully yesterday! WINNER’s Seunghoon had an accident, as he fell off the stage during the encore. T_T He got back up and went back to the stage in a truly admirable “The show must go on,” attitude.. ❤ YG Family, especially his co-WINNER members worried about him, but they continued on as well. But the production team already confirmed that he’s doing okay and the fall did not result into anything serious, so we’re happy for that! Praying that all the YG Family artists stay safe and sound.. ❤ 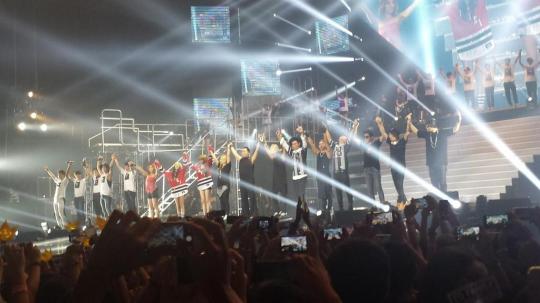 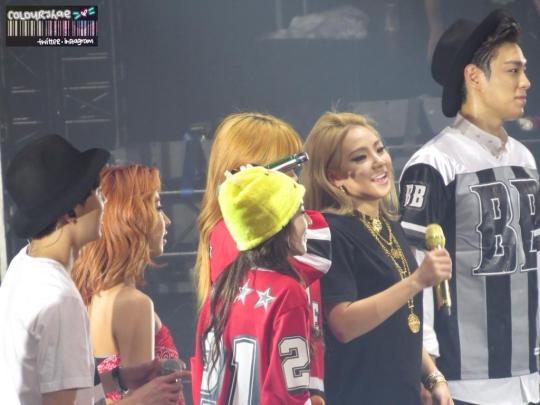 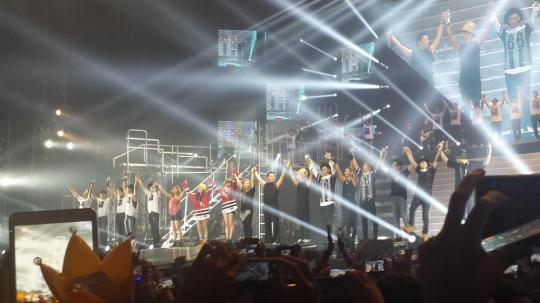 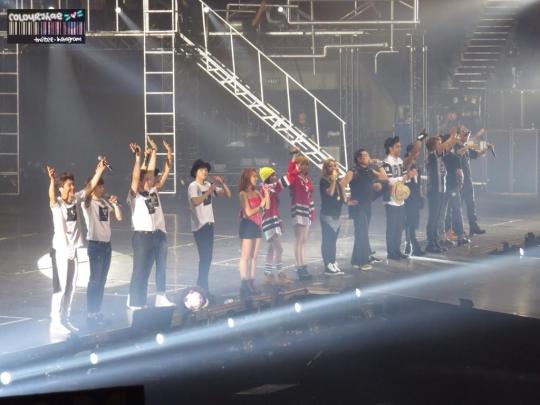 Check out more pictures after the cut!
END_OF_DOCUMENT_TOKEN_TO_BE_REPLACED 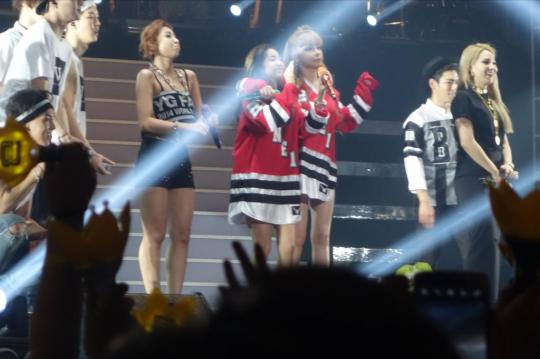 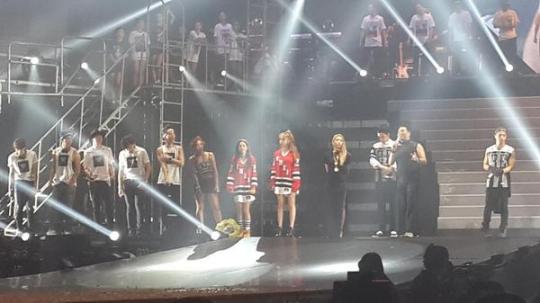 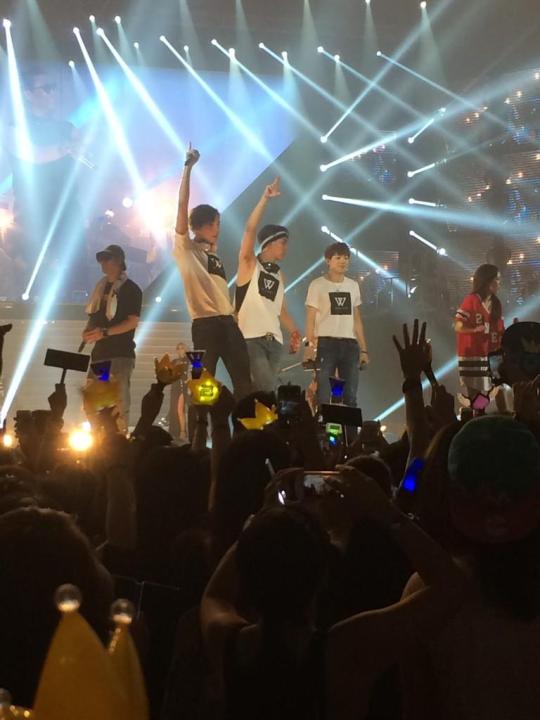 Taking a selca with Mino.. 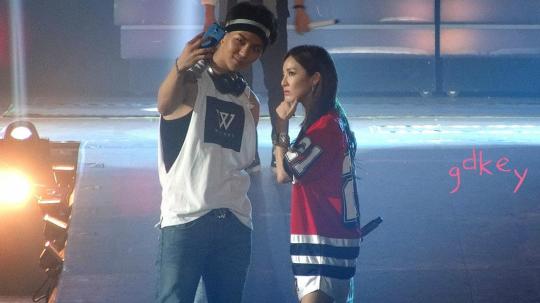 More after the cut!

END_OF_DOCUMENT_TOKEN_TO_BE_REPLACED

Scans: 2NE1 and YG Family for the September 2014 Issue of Teenage Magazine (Singapore) 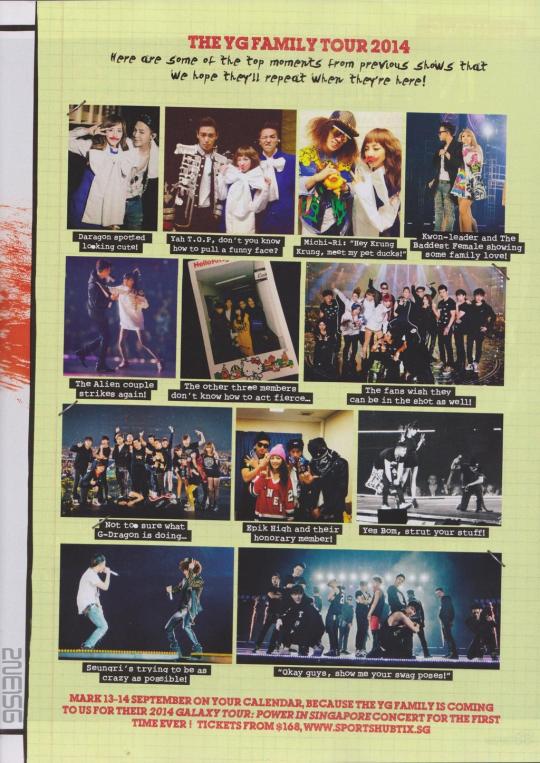 END_OF_DOCUMENT_TOKEN_TO_BE_REPLACED

Feature Article: AIA Festival 2014 – Why Going to a YG Family Concert is a Must-Go

AIA Festival 2014: Why Going to a YG Family Concert is a Must-Go 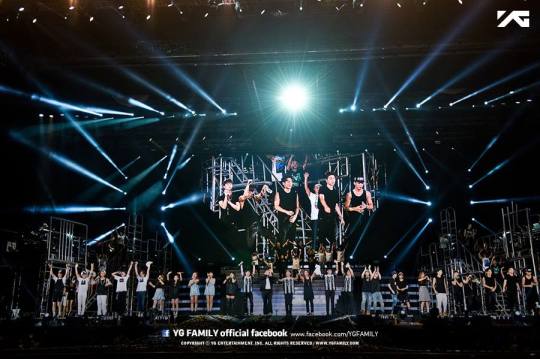 Would you stand for four and a half hours to listen to nothing but YG music?

Of course, you would! And that’s exactly what myself and thousands of others did at the AIA Festival 2014. 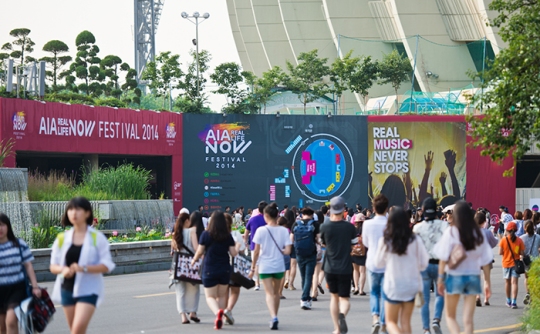 Concert goers start walking towards the entrance of the YG Family venue.

With more than 15,000 people crammed together in anticipation of their favorite YG idols, you could really feel the excitement, energy, and euphoric atmosphere within the crowd. I came ready for the massive hordes of YG Stans – the name for YG fans – as I brought coffee to provide enough caffine during the concert, as well as pack wet issues to fight off any sweat from the closed, crammed, sweaty confines I would soon find myself in.

The event was truly international as well. The YG fans in the audience were not just Korean, as you can hear Chinese, Thai, Japanese, and English within earshot.

The four an a half YG concert was also a test of endurance. Standing at the YG concert was actually an hour longer than a Lord of the Rings movie, but instead of watching wizards, elves, and trolls, I saw K-pop stars of all variety. The long concert, however, was worth every bit of exhaustion, leg aches, and sweatiness. Hearing Big Bang, 2NE1, Epik High, Lee Hi, Akdong Musician, Winner, Team B, and PSY was a treat all in itself.

As the time inched closer to the 6:30 PM starting time, the cheering has already begun even before the first act. It was time to get the show started! 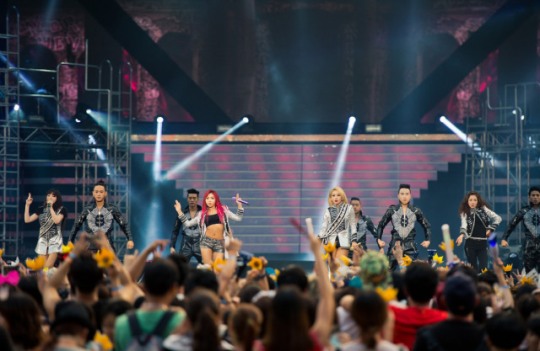 2NE1 opens up the concert to massive applause.

Pronounced as “twenty one” (and less commonly said as “to anyone”), 2NE1 is a four girl group that drops down the house with electro, dance beats. As the sister group of Big Bang, the four ladies are one of the most popular K-pop groups today. The group already has massive success, winning two Song of the Year awards with I Don’t Care (2009) and I Am the Best (2011).

The four ladies of 2NE1 were the first group to kick things off. Singing their iconic songs “Crush” and “Fire”, the fans were already in full swing, cheering and singing the song lyrics word-for-word. They later sang the addictive lyrics of “it ain’t over till it’s over” in “Gotta Be You” then got fans to chant “Come Back Home”.

The energy brought on by the four ladies was infectious, as their electronica, dance beats made it easy to become immersed in the concert. It was also surprising that YG decided to bring out 2NE1 as the opening act. Usually, in concerts they save their biggest, most popular groups towards the end. Yet, what better way to start things off right than with one of YG Family’s crowning jewels? 2NE1 is YG royalty and easily grabbed the audience’s attention from the start.

The queens of the Blackjack kingdom had a bit of everything in their performance: a skit that involved motorcycles, bad girl strutting, and sensual dancing. Speaking of dancing…

Minzy, Minzy, Minzy. I’ll say she was the highlight of the four bad girls of K-pop. With her red hair she memorized the audience with her crazy splits, booty dancing, showing utmost confidence, and displaying that sensual side of hers.

Seeing Park Bom live was also great to see. She was recently involved in a drug scandal, as she laid low after the incident went down. Fortunately, the fans, including myself, had her back, as shouts of “we missed you” and “we’ll always support you” echoed through the stadium.

It’s good to see the four ladies back, stronger than ever this year after a two-year hiatus from touring (their last tour until this year was the New Evolution Global Tour back in 2012). 2013 didn’t feel the same without them performing live. Welcome back 2NE1!

END_OF_DOCUMENT_TOKEN_TO_BE_REPLACED

Videos: 140830 More Fancams of YG Family at the Encore of YGFamCon: Power in Shanghai

YG Family heated up the night of Shanghai.

In the evening of August 30, the Shanghai Stadium was filled with 35,000 excited fans who gathered to see YG Family’s first China concert: “YG FAMILY 2014 GALAXY TOUR: POWER IN SHANGHAI.”

The first group on stage was 2NE1. With a dynamic entrance with their 2nd full album’s “CRUSH,” they moved on to sing “FIRE,” “COME BACK HOME” and “GOTTA BE YOU,” fully gearing up the stadium. EPIK HIGH followed the four divas with “WITH YOU,” “LOVE LOVE LOVE” and then WINNER continued on with “GO UP,” “EMPTY” and “SMILE AGAIN.” The local fans were electrified by the artists.

BIGBANG followed up the heated up stage, dressed in gold outfits. As soon as they appeared, the stadium filled with gold, fans waving sticks with golden crowns on top. The stadium was united in one as the fans and BIGBANG sang “HARU HARU,” “BAD BOY,” and “FANTASTIC BABY” together.

After individual performances, YG Family was ready to showcase the highlight of the concert: collaboration performances. CL and GD transformed “THE BADDEST FEMALE” into “THE BADDEST MALE” and sang “MTBD” while SEUNGRI reinterpreted GD’s solo “CRAYON” in a comical way. WINNER’s SONG MIN HO and DARA performed T.O.P’s “DOOM DA DA” while EPIK HIGH and TAEYANG “EYES, NOSE, LIPS.” The collaboration was indeed special for the fans as these performances could only be seen at YG Family Concert.

Collabo performances were followed by PSY, 2NE1 and BIGBANG’s individual stages. PSY kicked off with the global mega-viral “GANGNAM STYLE” and moved on to sing “RIGHT NOW,” “GENTLEMAN” and “CHAMPION,” spreading his powerful energy in the stadium. 2NE1 appeared next to sing the much loved “I AM THE BEST” and “SCREAM,” while also singing “CAN’T NOBODY.”

The dynamic ending was by BIGBANG’s “TONIGHT,” “FEELING,” “HANDS UP” and their mega hit songs “LIES” and “HEAVEN.”

After the show, the local fans were much enthused to see more, and the entire YG Family appeared on stage for a curtain-call performance. Starting from 2NE1’s “GO AWAY,” YG Family performed BIGBANG’s “FANTASTIC BABY” and PSY’s “GANGNAM STYLE,” once again uniting with the fans. YG Family’s first concert in China ended in huge success.