MANILA – Korean pop star Sandara Park appeared on an episode of the reality television show “Pinoy Big Brother: All In” on Friday.

Park, who is one fourth of girl group 2NE1, was asked to help out the housemates for a Korean-themed webisode, which was also the finale of the series entitled “Hmm Pak True Lab.”

The 30-year-old singer, who was wearing a bright red pullover dress, was met with similar awe from other housemates, with some blurting out introductions and amazement over Park’s fluency in the Filipino language.

Former child star Jane Oineza instantly recognized Park and shared that she once impersonated the pop star for a parody of the latter’s hit song, “In Or Out.”

After the shoot for the webisode, Park gamely traded stories with the housemates. She told celebrity house guest Alex Gonzaga that a Korean “friend” of hers wanted to say hi.

“Crush niya ako,” Gonzaga quickly added, much to the amusement of everyone in the room, including Park.

In the episode, Park taught the housemates several Korean expressions, including one for “you are beautiful” and “how are you.” She also showed off her dance moves when she performed to the tune of 2NE1’s hit “Fire,” with self-confessed K-pop fan Maris Racal.

Park, before leaving the Big Brother house, shared that she would’ve loved to stay for a night if she had the time. “Kung wala lang akong work, matutulog ako dyan,” she told Kuya.

“Kaya lang baka magbabayad ako kasi may contract ako. May gagawin ako bukas,” said Park, who will be at the Mall of Asia Arena this weekend for her group’s “All or Nothing” tour. “Pero kung wala, mag-stay pa ako dito.”

The episode’s official hashtag #SANDARAinPBBALLIN reached No.1 in the list of worldwide trending topics on the micro-blogging site.

Other terms such as “Hi Sandy” and “Bye Dara” were also part of the worldwide trends moments after the episode aired.

This came as no surprise, however, as since her arrival last Thursday, Park and her several television guestings frequently topped both local and worldwide trends.

Park’s K-pop girl group, the wildly popular 2NE1, will perform in Manila on Saturday as part of its world tour. But before the concert at the Mall of Asia Arena, which will coincide with the four-member group’s fifth anniversary, Park will visit her home network in the Philippines.

In a series of posts on its social media accounts, ABS-CBN and “Pinoy Big Brother: All In” announced that Park will guest on the reality show’s afternoon edition, “Uber,” and its primetime telecast on Thursday.

Shortly after the announcement was made, “Si Sandara Park” quickly became a worldwide trending topic on Twitter on Tuesday afternoon, with fans of the 29-year-old performer expressing excitement with her guest appearance on “Pinoy Big Brother.”

Aside from Park, the reality show’s official hashtag for the day for its afternoon telecast, “#uberNOBELA,” once again topped Philippine and global trends on the micro-blogging site. 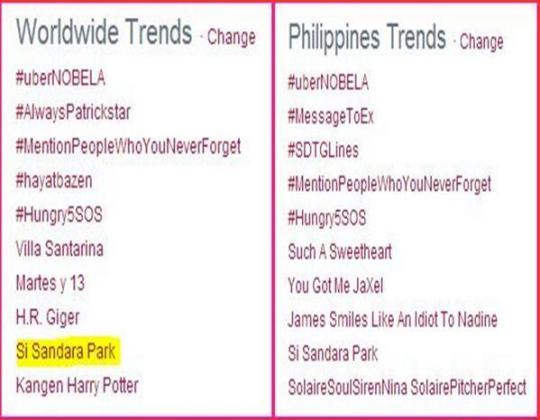 Dubbed the Philippines’ “pambansang krungkrung,” Park rose to fame in 2004, when she finished runner-up in the ABS-CBN talent search “Star Circle Quest.”

After a string of film and TV projects, Park, however, decided to leave for Korea to pursue a showbiz career there. In 2009, she took on the name “Dara” as a member of 2NE1.

Excerpts taken from the article above [with translations]:

But for a pure Korean who is now based in the Philippines, Jenny, or Jin Sol Kim considers Sandara Park, now known worldwide as the member of Korean pop girl group 2NE1, as a huge inspiration. “Natutuwa ako kapag napapanood ko siya. [I feel happy whenever I get to watch/see her] I feel proud to be a Korean and also to be here sa [in the] Philippines. Nasa Korea na si Sandara [Sandara is already in Korea] and she’s making people there very happy but at the same time pati ‘yung mga Filipino dito at ‘yung ibang Korean na nandito na proud din sa success niya. [… both Filipinos and Koreans here are also proud of her success.] Sana ma meet ko siya one day.” [I hope to meet her someday]

Sandara and her Korean family had been living in the Philippines for some time when she joined the reality search Star Circle Quest in 2004. Though she only finished as a runner-up in the competition, Sandara managed to enjoy a successful career in showbiz, doing teleseryes and movies. A couple of years later, she and her family decided to go back to Korea where she became part of 2NE1. Her singing and dancing training in ABS-CBN became her edge to establish a career in Korea.

Thanks to zaizai and contessa for the tip 🙂

I agree with some of your comments but let’s refrain from bashing, please. I also don’t agree with some statements in the article (by abs-cbn.com) but those are all in the past now.  Let’s just focus on the fact that Dara is an inspiration. 🙂 Peace and love y’all. <333