Kekekeke! Now we know why you’ve been working out extra hard these past few days! Hello again abs! ❤ Thank you Ssabunim!

Plank challenge for 1 min!!! Photo by @hwangssabu 💪 Aigoo I feel like dying… 💦

In many of 2NE1’s music videos, you would see them wielding a bat. Later on, you will realize that they use this for crushing charts and breaking records. From the moment they debuted as a group in 2009, these formidable femmes – CL, Bom, Dara and Minzy — have treated mediocrity with spite, choosing to blaze new trails in a music genre that was then dominated by four-letter words like “cute” and “sexy”. They wasted no time in creating a look, a vibe and a musical influence that was entirely their own – sharp, edgy, fierce and defiant. After sweeping scores of major awards from the Korean music industry, they flew to New York City where they were crowned MTV Iggy’s Best New Band in the World in 2011. The following year, they became the first K-Pop girl group to embark on a world tour, before promptly proceeding to do musical collaborations with the likes of will.i.am and Snoop Lion.

Things fell quiet in 2013 when they busied themselves wrapping up their second studio album and dropping a few singles that tickled but did not exactly tantalize. Then, boom – their agency, YG Entertainment, announced a second world tour scheduled to kick-off in Seoul by March 2014. And oh, that long overdue second album? It will drop a few days ahead on CL’s birthday, since she composed three of the tracks. What followed was absolute bedlam. Their fans – known collectively as Blackjacks – started dusting off their light sticks, printing new banners and pinching their allowance to purchase concert tickets, digital tracks and hard copies of the new album, “Crush”.

Meanwhile, the tour concert entitled “All or Nothing” (AON) caught people’s fancy with its sleek, sci-fi themed cinematic teasers and creative promotions that had the otherwise elusive girls appearing on variety shows, staging fan meets, hamming it up in their own YouTube videos and basically inundating their personal social media accounts with an enticing trail of photos and other sneak peeks leading to the show. To date, AON has announced 15 performances covering 12 cities in nine countries, with more stops still on the drawing board. However, the most important concert date for Filipinos falls on May 17, when 2NE1 brings AON to Manila at the Mall of Asia Arena. It has been three years since they first visited for a gig called “The Party” and this is the first time they are coming for a full concert, leaving their Pinoy fans breathless with anticipation.

To get a preview of what’s in store for us in May, this writer flew to Seoul to watch both nights of their AON launch at the Seoul SK Handball Arena. Despite the freezing post-winter weather, 2NE1 burned down the hall and everyone in it with the kind of frenzied conflagration only they can conjure. Here are some of the hottest reasons why watching AON is good for you, your friends and the entire human race:

In a word: yummy. You wouldn’t believe someone as seemingly frail as her could carve a four-pack but she did it in just two months, following a strict exercise and diet regimen which called for giving up her favorite ramyun and pumping iron every day under the eagle eyes of their company’s captain trainer. Undoubtedly, all the hard work paid off. The minute the girls step out onstage, those glorious abs are practically stamped as “Today’s Special”. So yes, I’d like a serving of Sandara Park’s scrumptious prime cuts served on a stretch of silky smooth, slightly tanned, honey gold skin… please!

END_OF_DOCUMENT_TOKEN_TO_BE_REPLACED 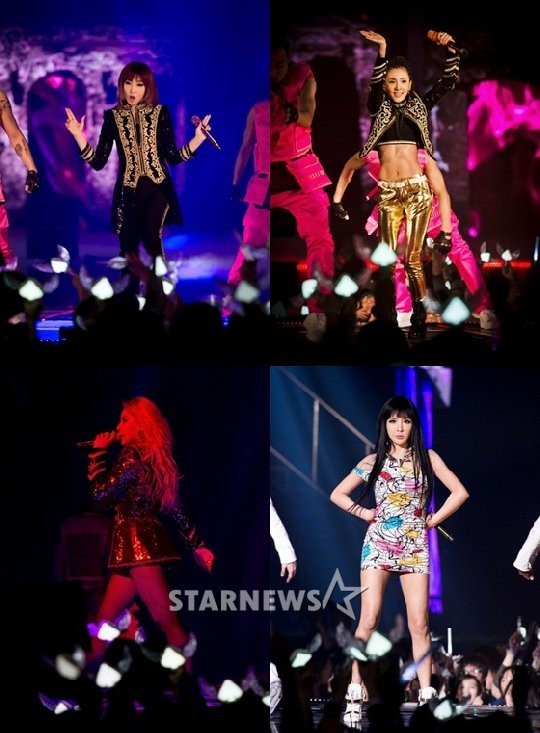 [스타뉴스 길혜성 기자] The girl quartet 2NE1 excited the fans by unveiling the performances of their newest songs and the music video at their 2nd World Tour.

2NE1 kicked off their second day of concert at around 6:10 pm on March 2, as part of the 2nd World Tour held at Seoul Olympic Park SK Handball Arena. The 2-hour concert was their second one in Seoul, following just the day before. The four divas were once again joined by 6,000 fans, who responded enthusiastically at everything the girls did.

The concert built much expectations among the fans and 2NE1 themselves, as the four were performing the new songs in their latest album “CRUSH,” unveiled on Feb 27, for the very first time.

The members appeared on stage dressed in fancy gold. They immediately delivered the new song “CRUSH,” exciting the fans from the very start. They then moved on to perform their hit song “FIRE.” 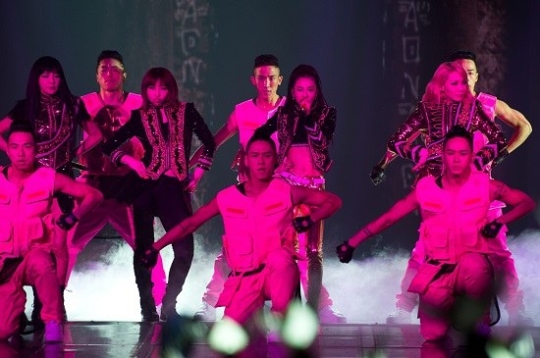 After “FIRE,” 2NE1 greeted the 6,000 fans enthusiastically, “Long time no see and it’s great to see you again!”

CL, the leader, asked, “How did you like “CRUSH,” the first track in our album?” to which the audience cheered on with much zeal. DARA introduced the song as “a song composed and written by CL.”

CL asked MINZY how she felt, to which MINZY replied, “I am about to go insane with excitement by seeing you guys,” making the fans go wild.

All members ended the greeting with a comment, “We are thrilled to hold our 2nd World Tour, and I hope you have a really exciting time!”

2NE1 also delivered dynamic performances of other new songs from the 2nd full album, including the double title songs “COME BACK HOME” and “GOTTA BE YOU,” and “IF I WERE YOU.”

After “COME BACK HOME,” MINZY demonstrated a dance that “Our boss (YANG HYUN SUK) choreographed,” which is a dance move of bouncing forward while doing a wave—which the fans loved.

2NE1 also unveiled a music video of a song called “HAPPY” from the latest album. This was the first time a M/V was revealed from this album. Fans were fully drawn into the M/V filmed in the U.S., featuring cute tomboyish members of 2NE1.

Apart from this, each member delivered her own something as well.

The usually cute DARA revealed her well-built abs. During the concert, she commented, “It took us a while to produce this album, but I am extremely happy with it.”

CL disclosed her new solo “MTBD” and previous “THE BADDEST FEMALE” with sensational outfit and performance. BOM told the fans 2NE1 visited a fortuneteller when their album release was delayed. MINZY, who just turned 20 this year, attracted attention with much more matured womanly charms.

The new boy group WINNER who also belongs to YG Entertainment, same as 2NE1, appeared as guests for the divas’ concert. They commented, “We are very honored and thankful to be here as guests for 2NE1’s 2nd World Tour,” and added, “We will work hard so we can become great singers like 2NE1.” To this the fans excitedly applauded.

The 2-hour concert included about 20 songs including “UGLY,” “I AM THE BEST,” “CLAP YOUR HANDS,” “I DON’T CARE,” “GO AWAY” and other hit songs, joined by energetic fans.

Kick starting from Seoul concerts joined by 12,000 fans, 2NE1 began their 2nd World Tour in full force. They will travel across 9 countries including Japan and China, travelling through 13 cities for 17 concerts to meet the international fans.

Just like the first World Tour, the two world-renowned directors TRAVIS PAYNE and STACY WALKER joined the quartet again for the latest Tour.

In the meantime, 2NE1 has been topping major South Korean music charts with the double title songs “COME BACK HOME” and “GOTTA BE YOU” since their release. After 4 days, on March 2, the album is within the top 100 of 20 iTunes across the globe, attracting much attention from all over the world.

The music video of “COME BACK HOME” is to be unveiled on March 3, while the offline version of 2nd full album will be released on March 7.

Line: Dara is Dismayed at Wearing a Short Top When Her “Abs Are Gone”

OMG Dara if we even get your flat stomach, I’d be happy forever! ^^ And we LOVE LOVE LOVE your outfit! 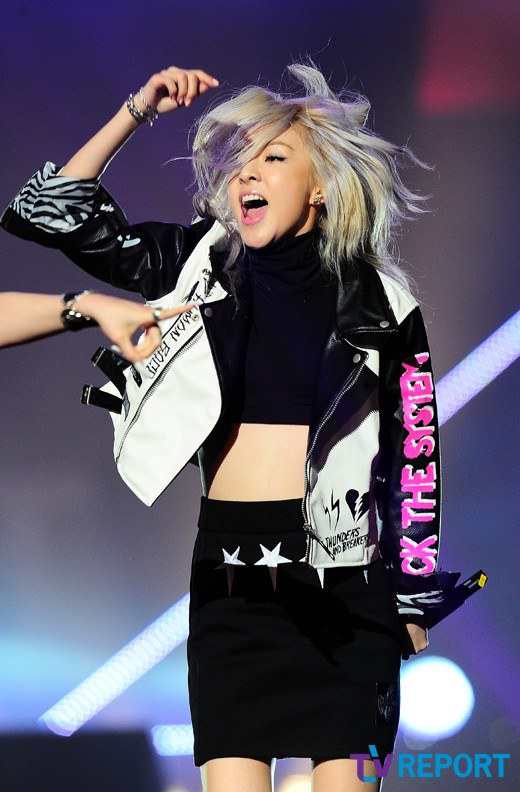