Today, 2NE1 pre-recorded “Come Back Home” and “Crush” for this Sunday’s Inkigayo! Some lucky IBJs went to the recording, and shared some fun anecdotes! 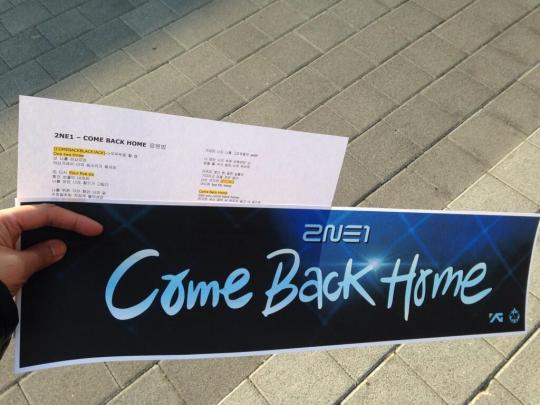 Ok now CBH is really done. They just shot it from a different angle ^^ fans are going outside again.

D’s so cute! kept on losing one of her earring so she’s the last to leave the stage at times. Cos she’s still looking for it^^

she’s wearing a white circular hat. Her hair underneath is quite messy LOL. Sorry im not good at describing ><

she’s wearing black pants with zipper and leather details at the knees. Black boots. Sleeveless top with rippings at the side.

hair like the one in the teaser photo with the hat ^^

recording for CBH just ended! they recorded like 6 times

dara keeps losing her stuffs on stage (ring?) she was so cute trying to find it she look like a young little girl who lost her soft toy

After recording 1 of the stages all except Dara got down the stage, thk she lost her ring while perf-ing! But she found it later ㅋㅋ

Bommie was talking to some fans (idk abt what) and she tripped abit over sth but she’s fine! ㅋㅋㅋ