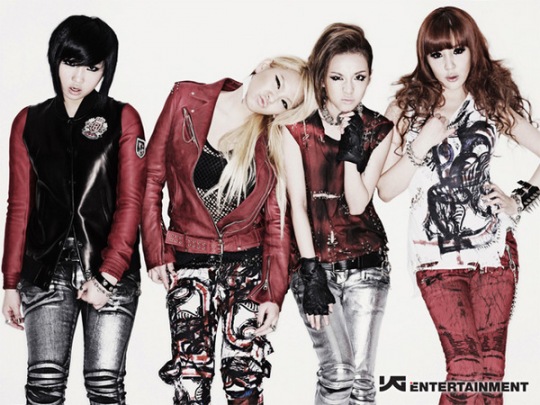 Girl‘s unit, 2NE1, the 4 member powerful group from South Korea is to debut in Japan with their Japanese version of single “GO AWAY” to be released this spring. They debut in South Korea around 2009, and were known as the “Younger Sister” of the popular classic group consists of 5 men, “BIGBANG” and were awarded as the Rookie of the Year award in Japan.

2NE1 achieved more than 30 crowns by last year. Their high quality music, well refined dance moves, styles, and even famous artists paying attention to them all over the world, this group is expected to break big in Japan.

“It’s been a long time our Japan debut awaits. We work hard to meet and answer the expectations from the fans, and we hope that many people will listen to the music of 2NE1.” Leader of the group CL (shi-eru= 19), who lived in Japan in the past, said excitedly.
The group consists of 4 members CL, Dara (dara= 26), Bom (bom= 26), and Minzy (minji= 17). The group name stands for “21” and New Evolution of the 21st Century. If you look at their lyrics it expresses and state the art of R&B sounds in which the likes of Lady Gaga and Rihanna made to resemble, and the group goes an all round concepts of independent woman to bring that they are cool, attractive, charming the way they are, plus their sexy dance.

The group’s impact started in March 2009 when this group ranked high in their explosive popularity after the collaborated music “LOLLIPOP” a catchy song in which 2NE1 collaborated with their senior BigBang, a song appointed for a cellular phone of LG Electronics, and it is said that after the release of the song, the phones are sold explosively.

During May 2009, they debuted with the song single “FIRE”. The music video that was only 20 seconds opened to the public in the official site already recorded million accesses in a day. Their mini album “THE FIRST MINI ALBUM” is put on the market in July of the same year. 1st places were recorded in various music charts in South Korea, and they immediately joined as one of the top artists in Korea.

At the end of last year, “MNET Asian Music Award” awarded this female group as Artist of the Year, and their first full album “TO ANYONE” won as Album of the Year award, and the music video “CAN’T NOBODY” won as the Best Music Video award. The total number of their wins reached to 30 crowns.

This group is expected to conquer the world in the future, and will land as of now in the land of Japan as The Next Generation of girl group worlds.

Their big brother BIGBANG, and their fans in Japan supported this finally debuted in Japan 2NE1. 2NE1 is a group with various attractive colors and powerful charm that emitted from their small body. It pushes hard. The delivery started on March 9 as “GO AWAY” debuted as a ring tone, an independent song that throws out anger to a man, and determined to be separated in a weak female line.

They gain attention from the US also.

Will.i.Am (35) from the R&B group Black Eyed Peas falls in love to the music sense of 2NE1, invites the group to his studio in U.S California state last summer, and produce several collaboration tunes for them. “I wanted to work together with them by all means. Let’s surprise the world together making the beat and cool music!” the singer praised highly.

In addition, the group’s make up and fashion sense are greatly popular in the youngsters. Their high cutting shoes and leggings took explosive sales in South Korea. And even world renowned fashion designer Jeremy Scott provided clothes for them.

CL [shi-eru] – Birthday February 26, 1991. Rap and vocal in charge, and the leader of the group. Spent her childhood and infancy stage in France, Japan, and the United States in the convenience of her father’s work. And fluent in Japanese.

DARA (dara) – Birthday November 12, 1984. Vocal In charge. Appears in a South Korea TV Show in 2004, entered show business as an actress. Her brother Cheondoong is part of a male quintet group “MBLAQ”.

Bom (bom)- Birthday March 24, 1984. Main Vocal in charge goes to study in United States during her sixth grade in elementary school. Enters YG as a trainee after she graduated in a Music University in the United States. Studied Chinese and Japanese.

MINZY (minji) Birthday January 18, 1994. Rap and vocal in charge. Participated in many dance competiotions before. Her grandmother, Gong, is a popular legendary dancer in South Korea.

A/N: It was very loooong! It seems like a review and summary of 2NE1’s growth in the past years. It is nice to reminisce the success of 2NE1, and how hard to be part in that group. All members are really jjang and deserve the spots. They are a group well match made in heaven. But the pressure. Well, they are the strongest girl group 4-duo after all!