Okay, so I bet some of you guys (those who follow me on Twitter anyways XD) might have known this was coming. ^^ Gadaffi Ismael Sabi (@dafiismailsabri) is a Malaysian celebrity fanboy of Dara’s who I find really cute with his spazzing and all. XD Gadaffi, who is more known for his nickname, Dafi, born on December 14, 1988,  is a singer/actor who got his break into Malaysia’s entertainment world when he participated in a reality TV talent show, Akademi Fantasia. If you guys can still remember, he was already featured in the blog last year for being one of Dara’s celebrity fanboys!  Check this article out if you want to know more about Dafi!

He was tweeting in excitement on the evening of the 23rd, and went to watch Twin Towers Alive Concert in Malaysia, where 2NE1 performed in! Like all of us fans, specially the Blackjacks MY who were at the venue, he started tweeting even before 2NE1 came up on stage. He then went on to do a series of tweets calling Dara “darling” which I find really cute and endearing, kekeke!

He also uploaded pictures of the girls performing on his Instagram! These are the group shots that he uploaded: 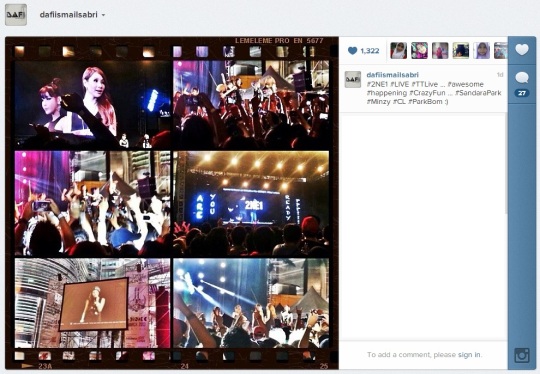 And of course Dara had her own series of pictures. Kekeke! We are happy that you got to meet her too! XD

Prior to the concert, on the 19th, he uploaded an Instagram picture of his phone’s wallpaper. Guess who is in it? Right! Our cutie Sandara Park! <333

Before the concert, he tweeted that he wanted to meet with Dara and the girls! But sadly, this didn’t happen. T_T But I think it’s safe to say that he enjoyed himself at the concert and was happy enough to see his “darling” Dara in person! ^^

Do you guys know a celebrity in your country who likes Dara? Leave their name and Twitter account on the comments section below and we’ll see. ^_^