News: 2NE1 Appears in “Sketchbook” Show on the 18th, to Present a Parade of Live Performances for their Hit Songs

2NE1 APPEARS IN “SKETCHBOOK” SHOT ON THE 18, TO PRESENT A PARADE OF LIVE PERFORMANCES FOR THEIR HIT SONGS 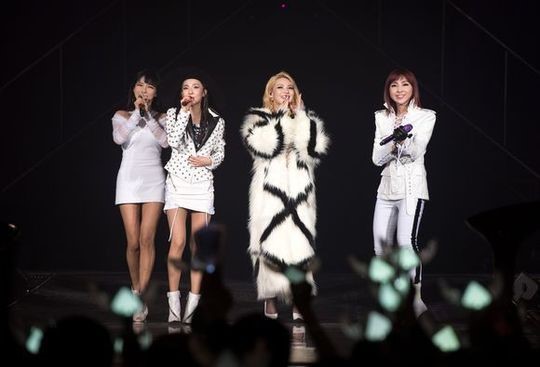 2NE1 takes part in the shooting of “Sketchbook” on the 18 this month, to present a variety of performances. Before that, 2NE1 appeared in “Sketchbook” in August last year in four years, to create a sensation by singing their hits including “I AM THE BEST”, “FALLING IN LOVE”, and “DO YOU LOVE ME”.

2NE1 has recently been under the spotlight in and out of the country, with the release of their second full-length album “CRUSH”. 2NE1 has not only swept the No.1 places in real-time music charts and daily charts upon the release of the music, but also set a new record for K-Pop by taking the 61st place on “Billboard 200”, Billboard’s album chart, for the first time for a Korean singer. 2NE1 has also been receiving a series of rave reviews from Korean and foreign media outlets since they released the music video of their new songs.

Plus, 2NE1 attracted a lot of attention by captivating fans with an enthusiastic and powerful live performance at the Seoul concert of their second world tour “ALL OR NOTHING”, which was held on March 1 and 2 at Olympic Park’s SK Handball Hall located in Bangi-dong, Seoul.

Meanwhile, before the shooting of “Sketchbook”, 2NE1 is to meet their fans in Mnet’s “M-Countdown” on the 13 and in SBS “INKIGAYO” on the 16.