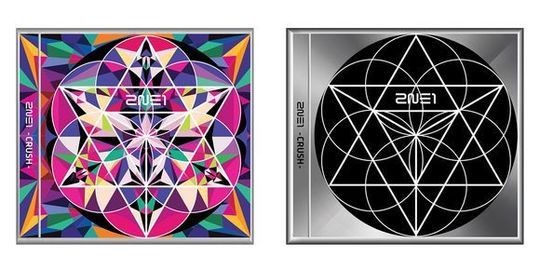 The physical version of 2NE1‘s second studio album CRUSH was finally released on the 7th on all national online and offline music stores.

This new album, which contains a total of 10 songs including the double title tracks “COME BACK HOME” and “GOTTA BE YOU”, has been released in two distinct versions: a pink and a black edition.

The visual contrast between these albums comes to show the wide range of charms 2NE1 displays via their music.

By working extensively on their album, treating the production and composition of every song as a possible title track, the group concluded all preparations with a product that encompassed various genres such as Reggae, hip-hop and R&B. CL, especially, was responsible for the writing and composition of “CRUSH”, “IF I WERE YOU” and “BABY I MISS YOU” as well as the lyrics for “SCREAM” and her solo track “MENTAL BREAKDOWN”.

Ever since 2NE1’s online release of “CRUSH” on February 26th, the album has been receiving positive feedback from national and international audiences. Not only has it managed to achieve an ‘all-kill’ in domestic online music charts but it also topped the iTunes charts in several other countries. For example, “COME BACK HOME” ranked #1 on the iTunes Top Singles Chart in the Philippines as well as their album CRUSH topped the Top Albums Chart at #1 in Indonesia, Singapore, Philippines, and Thailand. In addition, it ranked high on other countries such as the US, Canada, Mexico, and Brazil.

Most surprising of all, however, is the recent finding of “CRUSH” in Billboard’s chart Billboard 200. This marks the highest ranking a K-Pop group has achieved in the chart.

Currently, 2NE1 is preparing for their March 9th “Inkigayo” broadcast in which they will showcase their first comeback stage. In addition, they will continue their world tour ‘ALL OR NOTHING’ with their second destination, Hong Kong, on the 22nd.

Instagram: Dara Shares A Series of Her Shadow Pictures that Spells Out ~ “H-A-P-P-Y”