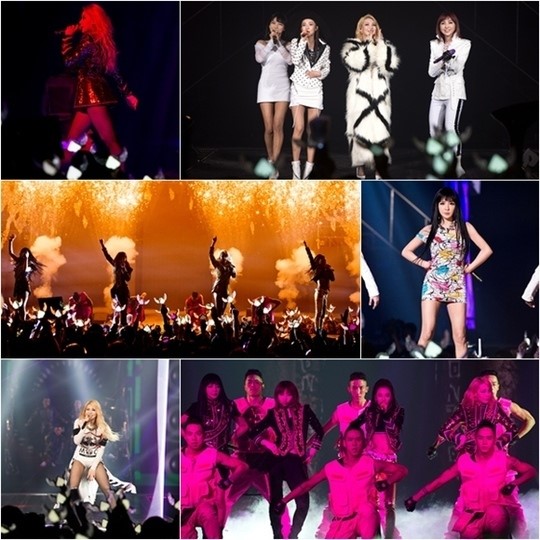 [OSEN=선미경 기자] 2NE1 was hot and energetic from the beginning to the end.

2NE1 has finished the Seoul concert of their second world tour “ALL OR NOTHING”, on the 2 this month at Olympic Park’s SK Handball Hall located in Bangi-dong, Songpa-gu, Seoul. The concert was held on March 1 and 2 and recorded a great success by attracting total 12,000 people of audience.

2NE1 appeared in the club by 1am on March 3. All the fans’ attention was drawn to the stage, as they had been waiting for 2NE1 for hours. Fans who filled the 1st and 2nd floor of the club acclaimed 2NE1’s enthusiastic performance. 2NE1 sang “I’M THE BEST”, “I LOVE YOU”, as well as “GOTTA BE YOU”, one of the double title tracks of 2NE1’s latest second regular album, and CL’s solo track “MTBD”. 2NE1 heated the atmosphere with their endless energy, even though they had poured all their energy into the world tour concert for two and a half hours before the after-party.

2NE1’s flagship image as “girls who play hard” was materialized on the stage of the club. 2NE1 gave performances which were as charismatic and powerful as in the world tour. Fans on the floor were impressed by 2NE1’s performances and enjoyed the fever of the concert further. Notably, MINZY’s powerful and sexy dance added to the passionate mood. Fans could not but give thunderous claps to 2NE1, for the small but powerful, colorful, and exciting performances that only 2NE1 can create.

Generally, singers have an after-party with concert staff who worked hard with them for a concert. 2NE1’s after-party with fans and disclosure of it is a very rare case in Korea. Notably, 2NE1’s exciting and enthusiastic response on the stage to their fans, who gave them clapping and cheering even after the concert, was very impressive.

Meanwhile, total 15 concerts will be held in 2NE1’s world tour, in 12 cities in nine countries including China and Japan, after beginning from Seoul concert. Travis Payne and Stacey Walker who had produced the first world tour of 2NE1, took part in the production of the second world tour once again, and a world-class live session band and visual video team Inpossible worked with the producers to create a concert that entertains both the eyes and ears of the audience.

2NE1 gives a comeback performance for their second album in SBS “INKIGAYO” that will be aired on the 9 this month, and continue to appear on TV in Korea and meet fans around the world through their world tour.

Photos: 040302 Fantaken Pictures of Happy Dara at 2NE1’s “All Or Nothing” After Party