As most of us all know by now, the Philippines was hit by Super Typhoon Yolanda (international name Haiyan) last Thursday killing an estimated 10,000 people and wiping out billions worth of homes and property. Because of this, OhDara/WeLoveDara did a private donation drive and was able to raise roughly $1000 to donate to the victims of the super typhoon. The money we were able to raise was then forwarded to GMA Kapuso Foundation, Inc. for distribution. The donation was done in the name of Sandara Park in honor of her 30th birthday for the country that she loves dearly as her second home.

We would like to thank our donors for opening up their hearts and pockets to help the victims of such massive destruction and devastation. Once again we have proof that not only did Sandara Park unite all of us in fangirling for K-Pop but she was able to create a community of individuals who love and have compassion to those in dire need. Thank you everyone!

Let us not forget to continue to pray for those whose lives are forever changed by such utter devastation.

Here’s a photo of the 2nd deposit made to GMA Kapuso Foundation, Inc.: 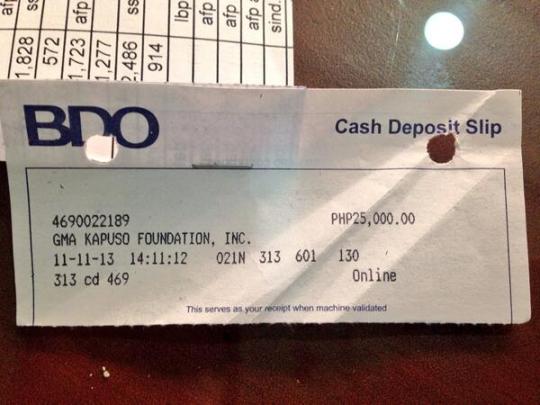 I know some are expecting us to have prepared elaborate personalized birthday gifts for Dara similar to what we have done in the past but we realized that this would mean more not only to Dara but to many of those in need as well.

HAPPY BIRTHDAY DARA! WE LOVE YOU SO MUCH!

Comments on: "Admin Post: Donations to the Victims of Typhoon “Yolanda” (Haiyan) for Dara’s 30th Birthday" (17)