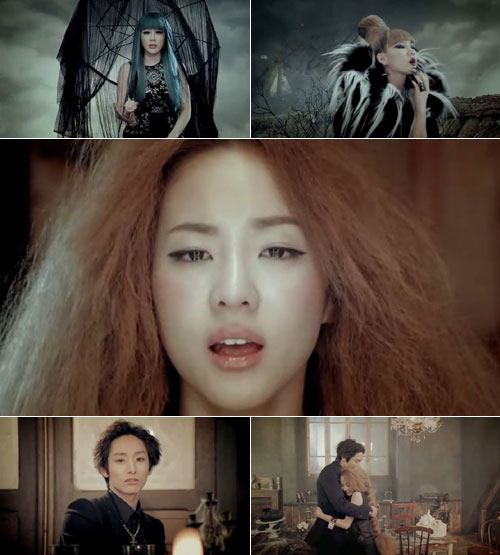 YG Entertainment revealed through its official blog, yg-life.com, that 2NE1′s follow-up song would be “It Hurts,” updating a unique picture of 2NE1 member, Sandara Park. “It Hurts” was finally released on November 1, 1:00 PM, gaining a hot response from fans.

In the music video, the members appear in chic, dark clothing, with a ruined building at the background. WIth their unconventional dress and hairstyles, 2NE1 managed to raise the unique atmosphere even higher. Park Bom’s turquoise hair, CL’s black leather boots, Sandara Park’s pale make-up, and Gong Minji’s unique attire, all added up to the fantasy feel of the video.

Fans and netizens response to the music video was hot and intense. “This music video really shows that Sandara Park is really good in acting,” “2NE1 is so unique and different!” “Normally, girl groups’ music videos are tedious to look at, but this one is refreshing,” “Only 2NE1 can pull off this concept,” “Sandara Park should be acting in a drama,” “The leads look so good together,” “Sandara Park unnie’s tears made me cry,” “Sandara Park’s acting in this MV is explosive,” “Even in the gloomy atmosphere, 2NE1 is still attractive,” “The transformation is so chic!” “Very gloomy yet effective fantasy” “It’s very distinct. Of course, it’s 2NE1,” showing an explosive reaction. 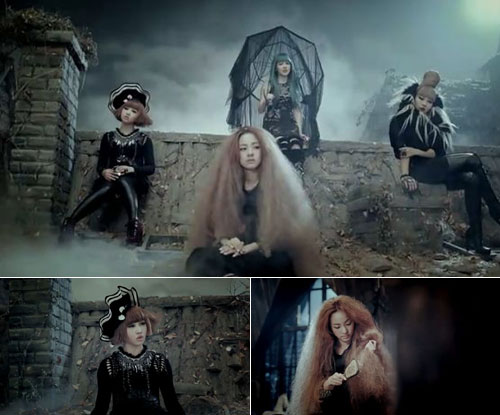 This song is still part of 2NE1′s new album, and is the only slow R&B song, which shows the members’ superb singing voice.

The song talks about a hurt female lover, and this became the benchmark of the music video, whose director was the same one who did G-Dragon’s “Butterfly” and TaeYang’s “I’ll Be There.”

Last month, 2NE1 announced that they will be doing follow-up promotions, and when it was finally announced that the song would be “It Hurts,” the promotions went head on. Already, their three title songs, “Clap Your Hands,” “Go Away,” and “Can’t Nobody” has already won many awards and had a great following after intense and remarkable promotions.

On the 31st, in SBS Inkigayo, 2NE1 already started their promotional activities for “It Hurts” with a powerful first stage performance.

2NE1 is expected to promote “It Hurts” until the end of the month, before stopping their activities for the “2010 YG Family Concert” to be held on December 4 and 5 at the Seoul Olympic Gymnastics Stadium, where the group would be holding their first concert stage.

Source: Nate News (there’s too many to enumerate)